She could have been a model. Tall, brown, and slender. Textured hair pulled back from her chiseled nose and cheekbones. She’d be sitting there most days at the edge of the Rhodes Tower on East Broad Street in Columbus, Ohio. A ledge there is just the right height for a hard seat. There she’d be most days, in a neat dark blue dress. No request, just waiting. We’d catch each other by the eye, smile, and she’d say to me, “I like your shoes…” or, “I like your dress.” Everyday a different compliment. I noticed she wasn’t there for several weeks at a time. Wondered about her.

She reappeared eventually, but she was different. Eyes, muddy. Scars and pimples on her thin nose. Parched skin over her cheekbones. The neat hair was now matted and covered with a knit hat, weathered khakis covered her thin legs, a dirty jacket had replaced the blue dress. On her back was a dingy, stuffed backpack.

She remained this altered version of her earlier self. Some days, she’d just sit, staring or she’d engage in conversation with someone who wasn’t there. Some days she struck the air against an enemy only she could see. Was she fighting some abuser who had changed her?
Still, when we’d catch each other’s glance, the compliments would come. “I like your hair. I like your coat,” she’d say.

One day, I stopped to talk and asked, “How’re you doin’?”

I said my name again, but then left it alone. “Do you need anything?” I asked.

Louie’s food cart is always planted a few steps away, so I got her a Sprite. I must have been taking too long because, at one point, she looked around the corner to see where I was. When I handed her the Sprite, she ripped off the tab in a hurry.

Another time I asked her, “You hungry? I could get you a sandwich.”

We went into Broad Street Bagel. I could see her awareness fading in and out as she looked up at the menu. Finally, she ordered corned beef.

The cashier, who was always friendly, smiled at me and said, “Oh, we see Monica everywhere. One night me and some friends were in the Brewery District. I said, ‘Monica, what are you doing here?’”

One morning, she sat inside the building near the Rhodes Tower Café.

said, “Hey, Monica. You need anything?”

When I brought it to her, she lit into it without hesitation and my presence dissolved as her focus shifted to food. At other times, I’ve seen her there with food provided by someone else. A lot of us are taking care of Monica.

I wonder where she goes when she’s not there. Where does she live? How is her life?

“Hey, Miss Kesha,” she says as I walk by one May afternoon. “You have a nice Mother’s Day?”

We talk for a moment and I ask if she had kids.

“Two daughters. One 14, one 17. They live in Cleveland.” She said she was planning to move to Cleveland to live with them. For a moment, I saddened at the prospect of not seeing her. Then I was ready to slap myself upside the head. Moving to Cleveland? Good. Be where folks can take care of her.

The move didn’t happen. Always, she is back at her stoop or standing outside the Rhodes Tower. I asked her one day, “Where do you live?”

She lowered her eyes and said, “With a friend.”

Another time she told me, “I’m just putting my time in.” I prodded a little more and she said, “You know, I work in human resources.”

I saw her one day writing in what looked like a composition book. I was mistaken.

A few days later, I asked, “What were you writing?”

“It was a puzzle,” she said. She’d been working in a booklet full of crossword puzzles.

Then I saw her smoking a cigarette. “Monica, you’re smoking?”

She said, “Gotta calm my nerves.”

After the 2016 election, she and I shared a laugh.

“I’m gonna pray for you,” and she smiled

Monica has never asked me for anything.

I have asked her, “Do you need anything?” She’ll say, “Yeah, I need something.” I’ve handed her cash. The amount varies. When I hand it to her, she looks furtively about before stuffing it away. Rarely thanks me. I disappear in that moment.

Still, she always remembers me whether I hand her something or not. “Hey, Miss Keesha. You’re always so pleasant,” she said once. And when I’m especially dressed up, “Oooh, you look so good. I love that coat.”

What if I give her one dollar every day, or five dollars? What if I give her a one-time infusion of $365? Gather resources and find her a home? Move her into my home. Follow her to see where she goes after she’s “put in her time” on East Broad Street. Press her for an answer about who she’s fighting in her mind, her eyes twitching as she rebukes her invisible adversary.

It has been several months, and I still see her on occasion. Last week she was carrying a shoe box and showed me the new pair of sandals inside. She never asks me for anything and she reveals very little about herself except when she’s feeling especially “tired and broke,” as she said last week. I feel I’m “assigned” to her by forces beyond myself, so I try to help her as best I can. Our story is still unfolding. 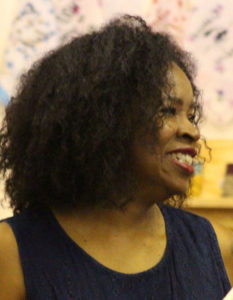 Chiquita Mullins Lee lives in Columbus, Ohio and work for the Ohio Arts Council. She also writes and performs with Wild Women Writing and Word Warriors at New Covenant Believers Church and participates in literary and theater presentations around Ohio. She has won creative writing and individual artist excellence awards from OAC and Greater Columbus Arts Council, been published in various anthologies, and nominated for a Pushcart Prize. Her play, Pierce to the Soul, about folk artist Elijah Pierce, premiered at CATCO (Contemporary American Theatre Company) in Columbus and toured central and southern Ohio with A Portable Theater Company.