Beyond capitalism | Movies you might’ve missed 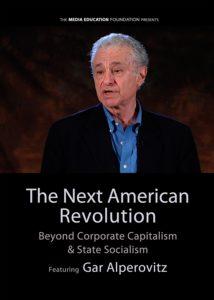 The Next American Revolution: Beyond Corporate Capitalism and State Socialism

In this videotaped lecture, historian and political economist Gar Alperovitz explains how “the next American revolution” is already under way in thousands of communities across the U.S. in the form of co-ops and community land trusts and municipal, state, and federal initiatives that promote entrepreneurship and sustainability. Alperovitz draws upon years of research to show how bottom-up strategies can work to check monopolistic corporate power and, at the same time, democratize wealth and re-empower communities. The result is a highly accessible look at the current economy and a common-sense roadmap for building a system more in sync with American values.

The film is available for rent or purchase from Vimeo. “What is the real cost of cheap?”

This is the question answered by filmmaker Jesse Borkowski in his 2014 feature-length documentary, which explains how so-called “cheap” goods are priced artificially low because their costs—in environmental destruction and worker exploitation—are either pushed into the public sector or ignored altogether. But it doesn’t have to be this way: the film profiles entrepreneurs who have seen their profits rise after focusing on sustainability, rather than low cost. They make the case that the true value of a product or service should include its impact on the global good—and that educated consumers will pay more for a product that is ethically sourced, responsibly made, and lasts longer. Although the examples profiled in the film all are located in North Carolina, the lessons learned can be applied anywhere.

At Piedmont Biofuels, for example, workers collect used fats, oils and grease and transform them into fuel. Demand for their product is at an all-time high.

In another segment, the president of a custom T-shirt wholesale business outlines the steps he took after the North American Free Trade Agreement (NAFTA) essentially gutted his enterprise. He decided to place ethical responsibility above concerns for the bottom line, and integrated wind, solar and biofuel technologies into his business model. By embracing these sustainability measures, his business has grown both in profit and in its standing within the community.

The spirit of activism and environmental responsibility drives every facet of operations at Sow True Seed in Asheville. The owner of this small business fights for the rights of all people to know where their food comes from. She teaches interested parties in her community how to plant seeds, empowers others to grow their own healthy food, and donates leftover inventory to local schools and support groups.

These values also extend into workplace practices that promote a shared sense of respect, teamwork, and purpose among each employee.

The film also gives viewers big-picture insights from business leaders, including Dan Ariely, a professor of psychology and behavioral economics at Duke University and the founder of the Center for Advanced Hindsight, and Ken Trapani, president and CEO of The Redwoods Group, an insurance consulting firm.

You can view the trailer here. The film’s website offers multiple ways to view for nominal cost—thereby supporting the sustainability of the filmmakers, and you can even watch the whole thing for free on YouTube: https://www.youtube.com/watch?v=ez3CWXQrgVo.