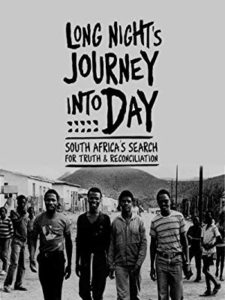 Long Night’s Journey into Day documents the work of South Africa’s Truth and Reconciliation Commission after 40 years of apartheid. Although it would be a gross overstatement to say that blacks and whites in South Africa are now reconciled, the Truth and Reconciliation process is credited with returning many individuals to society–enabling them to apologize for the actions to the families of victims they harmed. Ironically, the process was also the first that many whites in South Africa learned of conditions for blacks under apartheid, so segregated had their lives been and so little had they wanted to know.

The film follows several cases that the Commission monitored, including those of a white police officer who meets the families of the Craddock Four–black activists who died at his hands, and the Biehls, parents of a white American exchange student who encounter the black man who killed their daughter (and forgave him, even partnering with him to further their daughter’s work, as Linda Biehl describes in her interview on The MOON here).

Long Night’s Journey Into Day was directed by Frances Reid, who earned an Oscar nomination for her short subject Straight From the Heart, and Deborah Hoffman, an Oscar nominee for Complaints of a Dutiful Daughter. The film is not commonly available from the usual platforms, but we’ve included the link to its presence on YouTube. 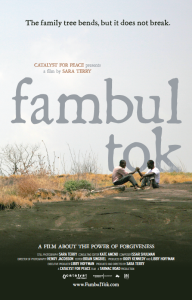 Fambul Tok, which The MOON has recommended before, is a film that documents the community-led peace-building and reconciliation process under way in Sierra Leone after a bloody 11-year civil war. “Fambul tok” is Krio for “family talk,” which is the essence of the reconciliation work. People who have been harmed by violence gather around a bonfire to tell their stories, and those who have perpetrated violence seek forgiveness–which is up to the victims to give or withhold. The process involves village-wide reconciliation ceremonies and follow-up community building activities, which are chosen and directed by the communities themselves.

The film also sparked a movement. John Caulker is the founder Fambul Tok International, which facilitates this reconciliation work–a work that has spread across the globe and, as shown in a follow-up video, has even helped American middle school students resolve conflicts and come together in ways they’d never experienced before.

Journalist Sara Terry directed the movie, which focuses on three stories at which Caulker and his organization facilitate fambul toks. The film opens at a bonfire in Foendor, a village in Sierra Leone. A young woman named Esther declares that she was raped at the age of 12 by fifteen men. She identifies one of the men as Joseph, her uncle. Joseph admits to the rape, but says that he was forced by rebels under threat of death. Next, a man named Sahr similarly confronts his former friend Nyumah. When rebel forces accosted the men 17 years earlier, Sahr and Nyumah were boys. The rebels attempted to force Sahr to kill his own father. When Sahr refused, the rebels forced Nyumah to severely beat Sahr and to slash the throat of Sahr’s father. Nyumah and Sahr reconcile after Nyumah admits to his actions and asks for forgiveness.

Much of the film focuses on the search for a man named Tamba Joe and his commander during the war, Captain Mohamed Savage. Tamba Joe was a native son who joined rebel forces during the war and committed violent acts against members of his community. A villager says that Tamba Joe killed and beheaded 17 members of his family. Mohamed Savage, nicknamed “Mr. Die,” initially denied being the person responsible for the murders and violence in Foendor. Bodies of those killed during the war were thrown into the nearby “Savage Pit.” Savage later admits to his role in the violence and plans to return to for a fambul tok, but changes his mind when he learns he could risk prosecution. In an online Epilogue, Savage does return and seek forgiveness from his community.

The film is almost breathtaking in the Sierra Leonians’ capacity and willingness to forgive acts one would think unforgivable. To visit the website and see that the work of reconciliation not only continues in Sierra Leone, but is spreading around the world, is truly inspirational. 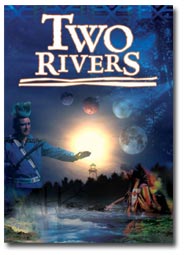 Two Rivers documents the true story of a Native-White Reconciliation process that began in a couple’s home in northern Washington. Understanding that the Native people had been driven from their homelands without compensation and in violation of a treaty, a group of whites set about seeking to make amends for that wrong–the pain of which continued to live in Native Americans as intergenerational trauma–to say nothing of their continued loss of access to their historic hunting, gathering, fishing, and ceremonial places.

Within five years many more white and Natives had joined the process, and together they launched social and political reconciliation initiatives that changed their community and race relations across the Northwest. 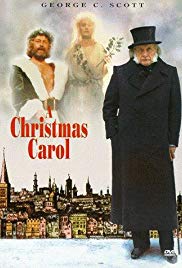 A Christmas Carol is a Dickens classic from another era, whose message continues to inspire today. My favorite retelling is the 1984 made-for-television version, starring George C. Scott as the miserable old Ebenezer Scrooge. For those who might not know the story, Scrooge is a miserly old man who cares only about money. He has no friends; his longtime business partner is dead; and most of all, he hates Christmas for the gaiety and conviviality he feels that the season forces upon him. On a single pivotal night, however, he is visited by three four “ghosts.” The first is the spirit of his dead partner, who warns him not to follow him into the afterlife wearing “the chains he forged in life” of his own inhumanity to man. The next three are the Spirits of Christmases Past, Present, and Future. By the time these spirits are through with him, Scrooge is a changed man. This is what I love best about the story: Scrooge finds that making amends–becoming generous and supportive of his fellow man–is a joyful affair. His misplaced adulation of money, rather than humanity, was making no one more miserable than him.