To the nth degree

A mathematically specious phrase intended to convey that something is raised to a very high level (as in “to the nth degree”), where “n” is assumed to be a relatively high number even though by definition it is unspecified and may be large or small.

We say we’re testing the limits
but if we’re honest
we’ve already scaled them in our heads
and they’re not as Himalayan
as we like to let on,
otherwise we’d have selected
let’s say, the 3rd degree,
which would challenge at least
what little mettle’s left in us
in this time of lowered expectations–
both for those who can do math,
as well as for the rest.

Truth is, in the meager math I learned,
the nth can be any degree
I might choose to solve for
though I know from a close look
at those strange Celtic languages,
unless you have a vowel
it’s sometimes hard to tell the difference
between nth and nthng—
though the teacher
insists there’s no such thing as nothing
when she calls on me
and that’s all I have to offer.

You’re exactly why God invented zero,
she tells my silence, much to my shame—
and the delight of others who sit by
with a relieved sigh, basking in the joy
of owning a name
that hasn’t yet been called.

Final Matters
Only objects carry the evidence that throughout the centuries something really happened among human beings.
–Levi Strauss

What happened here?
There is little agreement among us aside from
We’re born. We live. We die.
And, though we do insist on clothing ourselves,
nothing will remain of the skin
we’ve worked so hard to hide.
My mother’s to be buried in a shroud,
the final choice we made for her.
To show our devotion,
we picked the gown with wild nettles woven in.
To make it last, we’ve told ourselves–
and have arranged so it falls in gentle ripples
over her shoulders—fallen; breasts—fallen;
the belly from which we sprang—fallen.
Fallen, fallen, everything fallen—
these final days we’ve seen it all;
in the end, there is no shame.
Still, the young assistant proudly tells us,
We made her look good for you;
like her graduation. To be sure,
we have those pictures
and if we want, we can always look.
But what ever happened in all the days?
Something. Surely, something.
Then he shuts the box—gentle—
and does the clasp,
as if she were a keepsake. 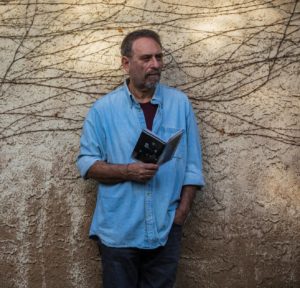 Alan Walowitz’s poems can be found on the web and off. He’s a contributing editor at Verse-Virtual, an online community journal of poetry, and teaches at Manhattanville College and St. John’s University. His chapbook, Exactly Like Love, was published by Osedax Press in 2016 and is now in its second printing. His poem, “The Story of the Milkman,” was featured in an article in The New York Times on April 16th. Go to alanwalowitz.com for more information.