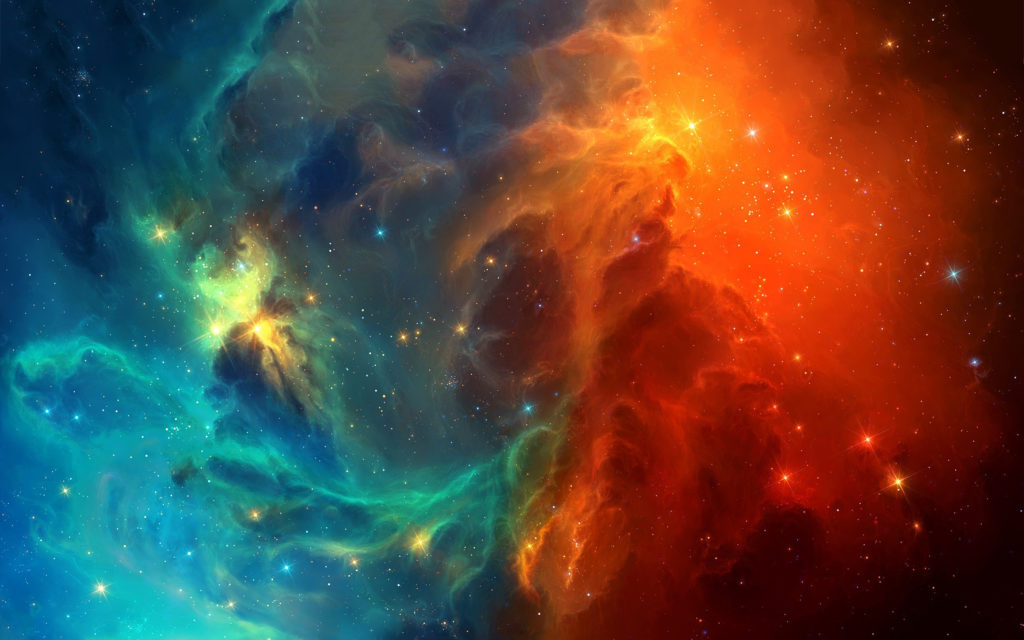 “There is one source that moves through all things. Once we realize that there is one vibratory source that is the root of all scientific and spiritual investigation, how can we say ‘my’ God, or ‘my’ religion?” – Daniel Schmidt

“At the quantum level, NO part of the body lives apart from the rest. There are no wires holding together the molecules of your arteries, just as there are no visible connections binding together the stars in a galaxy. Yet arteries and galaxies are both securely held together, in a seamless, perfect design. The invisible bonds that you cannot examine under a microscope are quantum in nature; without this ‘hidden physiology,’ your visible physiology could not exist. It would never have been more than a random collection of molecules.” ― Deepak Chopra

“God the Creator is the master physicist of the Universe and has used these tools to create the system of life and the balance of love.” – Kryon

“We almost eliminated any need for quantum theory. We solved the atomic structure in such a way that we are describing the atom as a mini black hole. A tiny, highly spinning singularity in space that makes up our world everywhere we look, everything you see, the billions of atoms that makes up your body… mini tiny black holes, white holes, radiating and absorbing photons and exchanging information with ‘the vacuum’ in a feedback between what’s outside and what’s inside themselves.” — Nassim Haramein

“There was once a Cossack who saw a rabbi walking through the town square nearly every day at about the same time. One day he asked curiously: ‘Where are you going, rabbi?’ The rabbi answered: ‘I am not sure.’ ‘You pass this way every day at this time. Surely, you know where you’re going.’ When the rabbi insisted that he did not know, the Cossack became irritated, then suspicious, and finally took the rabbi to jail. Just as he was locking the cell, the rabbi faced him and said gently: ‘You see, I didn’t know.’ Before the Cossack interrupted him, the rabbi knew where he was going, but afterward, he no longer knew. The interruption (we can call it a measurement) offered new possibilities. This is the message of quantum mechanics. The world is not determined by initial conditions, once and for all. Every event of measurement is potentially creative and may open new possibilities.” — Amit Goswami

“Knowing that a particle can occupy two different states at the same time—a state known as superposition—and, two particles, such as two particles of light, or photons, can become entangled, means that there is a unique, coupled state in which an action, like a measurement, upon one particle immediately causes a correlated change in the other.” – Sally Ember

“Around you, or a little above you maybe, is a beautiful garden, the infinite and eternal garden of the spirit; from this state of life, with its beauty and peace, and the love of its inhabitants, we draw close to you in your physical life to help you. We come to raise you above the limitations of pain and grief, into that true home, that heavenly life, from which you all have come, and towards which you all are journeying.” – White Eagle

“All things are feeding information to the vacuum and the vacuum is feeding it back. So when you move your little finger, everything in the universe knows you moved that finger, and adjusts for it.” – Nassim Haramein

“When two or more waves oscillate in tandem and, vibrating at the same frequency, experience a phenomena known as constructive interference, the two waves come together and crate a resultant waveform with much greater power and amplitude. Similarly, when people share a common purpose and focus together on a specific goal, their combined intent creates coherence in the Quantum Field.” – Joe Dispenza

“The distance between the nucleus and the electron of every single atom is filled with the love of God.” – Kryon

“You are not a drop of water in the ocean. You are the entire ocean in a drop.” – Rumi

“The universe self-organizes! How? Due to the feedback mechanism between physical objects (me) and so called ‘empty space’ (which is not empty).” – Nassim Haramein

“Only two things are infinite, the universe and human stupidity, and I’m not sure about the former.” — Albert Einstein

“When we contemplate the whole globe as one great dewdrop, striped and dotted with continents and islands, flying through space with other stars all singing and shining together as one, the whole universe appears as an infinite storm of beauty.” — John Muir

“We all float on the collective level of consciousness of mankind, so that any increment we add comes back to us. We all add to our common buoyancy by our efforts to benefit life. It is a scientific fact that what is good for you is good for me.” – Dr. David R. Hawkins

“[..] when we get down to the subatomic level, the solid world we live in also consists, again rather worryingly, of almost nothing and that whenever we do find something, it turns out not to actually be something, but only the probability that there may be something there.” – Douglas Adams

“Consciousness is the true reality, and matter is an epiphenomenon bordering on trivial.” ― Amit Goswami

“Einstein came to distrust quantum mechanics. Its statistical and deeply probabilistic nature sounded too much like gambling to him, and it prompted him to object that ‘God does not play dice with the universe.’ He was wrong, and it’s too bad that most people have never heard the rejoinder by Niels Bohr: ‘Einstein! Stop telling God what to do.’”
― Sam Kean