The oddest of courses I’ve taken was Q.E.D.,
the theory which shows that the summing of infinite paths
explains every particle’s motion and history,
with diagrams Feynmann drew countering Schwinger’s weird math.

Those theorists showed us how something like infinite paths
are largely the sum of the two simplest impulses tracked,
drawing on Feynmann, or counting on Schwinger’s weird math.
results that you get taking these will be close to exact.

You largely are something like two different impulses tracked:
find the most likely and add to it one with a twist.
The resulting you gets Tasty Freeze. We’ll be close to exact.
Those roads that were more and less traveled? Neither was missed.

Try the most likely and also try one with a twist.
Expand every part of your motion and history.
Take roads both more and less traveled. Leave no turn dismissed.
The oddest of courses I’ve taken wasn’t. QED. 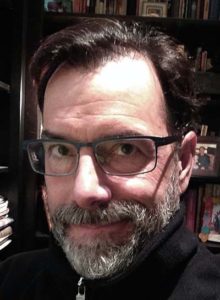 Charles Joseph Albert lives in San Jose, California, where he works in a machine shop during the day, helps his wife raise their three boys, and in the wee hours in between, writes fiction and poetry. His work has recently appeared in Abstract Jam, The Literary Hatchet, and Halcyon Days.