Armando Sanchez: The wave has arrived 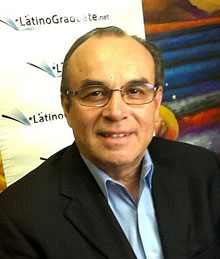 “The 2012 election was certainly a banner year for Latinos. Yet, Latinos’ impact wasn’t really a surprise…We’re the largest and fastest-growing minority. If it weren’t for Latinos, the U.S. 18-49 demographic would decline over the next decade–which would be a disaster for funding Social Security, Medicare, and national infrastructure investments, as well as for filling the future job market.”

The Moon: Has the 2012 general election ushered in a new era of Latino influence on national politics?

Sanchez:  The 2012 election was certainly a banner year for Latinos.  Thirty-six states elected a record-breaking 276 Latinos to their state legislatures.  Voters also sent 28 Latinos to the U.S. House of Representatives—another record—and three Latinos to the U.S. Senate.  In the Presidential race, particularly in key swing states like Arizona, Florida, Colorado, and New Mexico, Latinos’ support of Obama—or disdain for Romney—made a huge difference in the final numbers.

Yet, on the other hand, Latinos’ impact wasn’t really a surprise—to anyone other than the Romney organization, perhaps.  Back in 1988, Dr. David Hayes Bautista, a sociologist at UCLA, co-authored a book (Burden of Support) on the rising tide of Latino immigration and their increasing contribution to the public life of the United States.   Since that time, we’ve known that Latinos would one day become a demographic force—we just didn’t know the year our numbers and influence would become evident.

Latinos—by which I mean Hispanic-Americans, from the United States through Central and South America—are a growing percentage of the world’s seven billion people.  U.S. Hispanics currently number more than 50 million people.  We’re the largest and fastest-growing minority.  If it weren’t for Latinos, the U.S. 18-49 demographic would decline over the next decade—which would be a disaster in terms of funding Social Security, Medicare, and national infrastructure, as well as for filling the future job market.

Given all of these facts, it is surprising that we’re not more visible in national media—yet.  Many people think that Fox News is the #1 television outlet in the United States, but in Los Angeles, Univision is.  The Los Angeles Times reported that 10 years ago.  Today, KMEX, the local Univision station, remains the most-watched station in Los Angeles in prime time—and also during the 11 p.m. local newscast.

The Moon:  What changes do you think Latinos are going to make on U.S. policies?  How will their increasing influence be felt?

Sanchez:  Clearly, immigration is a central issue for most Latinos. Although many Latinos are fiscal conservatives and willing to consider Republican candidates—in fact, many are Republican—the harshness of Romney’s statements regarding immigrants convinced many of them not to vote for him.

The Moon:  What kind of immigration reform are Latinos looking for?

Sanchez:  If I had to generalize, I would say that most favor a non-punitive path to citizenship for illegal immigrants, some version of the Dream Act for children of immigrants, and a public discourse that recognizes the value of Latino contributions to the country and the economy, rather than one that characterizes them as lawbreakers and an economic drain.

For example, because of problems with the guest worker programs, Washington State has faced a severe shortage of apple-pickers for the last two years.  Apples are rotting on the ground because there aren’t enough people to pick them.  Farmers don’t like the guest-worker program because it’s bureaucratic and slow.  Farm worker advocates don’t like the guest-worker program because of abuses—farmers not paying the wages they promise; unsafe or unsanitary work and housing conditions, etc.  Although most Latinos don’t see a permit-based guest-worker problem as an adequate long-term solution to the issue of immigration, some of us believe that at least it’s progress for the issue to be formally addressed.

By the same token, I believe that NAFTA—the North American Free Trade Agreement—was a necessary development, no matter how flawed.  Seeing products from Brazil, Chile, Costa Rica, Ecuador, Mexico, etc., in American stores has raised our awareness of our regional interdependence—just as the Internet has raised awareness of our global interdependence.  These developments have helped people to realize that borders are largely imaginary and arbitrary.

The Moon:  Politics often lags behind changes that shape a culture.  What are some of the cultural changes you see that show the growing influence of Latinos?

Sanchez:  Well, Mexican food and Mexican restaurants, for starters.  They’re ubiquitous as far north as Alaska.  There are other indicators, as well, such as the popularity of salsa, merengue, tango, and even ballet folklorico, among non-Hispanic dancers, or the growing prevalence—and acceptance—of bilingual programming, prompting the question, “What other languages need to be included?”  I also see the popularity of Latino authors such as Junot Diaz, Sandra Cisneros, Laura Esquivel, Paulo Coelho, and many others.   Here in Los Angeles, we see Mexican bands selling out major concert venues—and recently there has also been a move to revitalize the city as the Mural Capital of the World.  Latino muralists started the initiative, and the Getty Museum is sponsoring it. Two years ago, an exhibit of the Mexican muralist Siqueiros at the Gene Autry National Center in Griffith Park was the most highly attended event in the Museum’s history.

The Moon:  You noted that a growing percentage of the world’s seven billion people are Latino. Yet population growth, rising consumption, habitat- and species-loss, and other pressures on the Earth are perhaps the defining challenge of our time.  Is environmental preservation and sustainability a priority among Latinos?

Sanchez:  Yes, I think the environment is a genuine, heartfelt concern among Latinos.  In fact, you see leadership in this arena from a number of Hispanic countries, such as Costa Rica—where President Laura Chinchilla Miranda is one of a new generation of Latin American leaders seeking to make responsible environmental management part of the fabric of their economic development policies.  I also think of Bolivia—which has enacted a law recognizing the rights of Mother Earth; and Brazil, which is considered the world’s biofuels industry leader, with the first sustainable biofuels economy.

Armando Sanchez is the founder and executive director of LatinoGraduate.net, a nonprofit devoted to helping Latinos succeed in college. He is a national media spokesperson on the topics of Latino learners, academic achievement, and leadership and hosts a weekly Blog Talk radio program called Latino Leaders and Role Models. He lives in Los Angeles.