Waste Land: an inspirational film about the transformative power of art 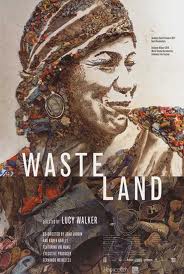 One of the catadores featured in Waste Land, Vik Muniz’ movie about the entrepreneurial workers at Jardim Gramacho, the world’s largest landfill.

In this multiple award-winning film, contemporary artist Vik Muniz returns to his native Brazil to photograph the lives of catadores–entrepreneurial garbage pickers in the world’s largest landfill, Jardim Gramacho, on the outskirts of Rio de Janeiro. As Muniz gets to know and collaborate with his subjects, we witness the transformational power of art at work and experience the beauty and dignity of even these “lowliest” of workers.

“That a beautiful film could be set in the world’s largest garbage dump sounds like an oxymoron, but acclaimed documentarian Lucy Walker has pulled off precisely that feat in her profoundly moving Waste Land,” said the Los Angeles Times.  Walker and her crew follow Muniz as he first photographs the catadores, and then works with them to transform the photos into portraits “painted” with recyclable materials. When the catadores see themselves as works of art–works that sell for thousands of dollars and draw millions of people to see them–the pickers come to see themselves in a new light and even to dream bigger dreams.