The Story of the Weeping Camel 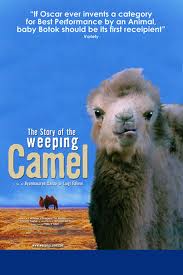 The Story of the Weeping Camel (2003) is an enchanting film that follows the adventures of a family of herders in Mongolia’s Gobi region who face a crisis when the mother camel unexpectedly rejects her newborn calf after a particularly difficult birth. Uniquely composed of equal parts reality, drama, and magic, this film is a window into a different way of life and the universal terrain of the heart. Directed by Byambasuren Davaa and Luigi Falomi and starring Janchiv Ayurzana, Chimed Ohin, and Amgaabazar Gonson, the film was nominated for an Oscar (Best Documentary Feature) and won 11 U.S. and international awards.

The Story of the Weeping Camel  beautifully demonstrates the quantum shifts possible through the power of awareness. It tells the story of the healing of a mother and calf camel traumatized by an extremely difficult birth. It’s set on the Mongolian plateau, the bleakest of environments, among a close knit nomadic family whose lives are entwined with the fortunes of the land and its weather patterns. It is a harsh landscape warmed only by the care each family member extends to ensure mutual wellbeing and survival of both themselves and the animals on whose lives they depend. This obvious communal cohesion conveys a belonging many of us, in our fast-running world, probably rarely experience.

The family become concerned at birthing season as one of the camel’s struggles and becomes stuck during her labour. This eventually causes them to literally pull, by hoofs and legs, the incapacitated calf from the mother’s womb. As the newborn arrives on the earth with a thud we notice it is a beautiful white calf. Sadly though, the mother rejects it. Over the course of the next few days she can’t be induced, by trick or pressure, to allow the mourning calf to suckle. It is as if the unbearable pain of the birth is re-created every time the calf draws near, upsetting the mother as she frets and pushes her calf away. The family members try all means, but it becomes clear that without the mother’s acceptance the calf won’t survive.

As the dilemma deepens the two young sons set off to the local village to seek help and in due course return with an older man who is the school music teacher and a shaman. After he has been welcomed the teacher picks up his instrument, walks to the camel, and sits nearby. The family gathers around him, all looking directly at the mother camel. Not far away is the stranded and ailing calf. As the musician begins to play his haunting tune on a simple stringed instrument the nomadic mother gently rubs the side of the camel’s body, about where her heart is, while singing a melodic song, as if calling into the very soul of the camel.

Slowly the tension in the camel softens and large tears fall from her eyes. Everyone watches, in a state of empathetic presence, as the music, camel, calf, woman, the landscape and family merge into a unified state that gently and naturally allows healing to arise. That it doesn’t take long is both surprising and unsurprising. Surprising because we assume healing takes time and unsurprising because we are witnessing a deeply natural process we intuitively recognize. Within a short time the calf is re-introduced to the mother camel. She accepts her baby as it reaches up to drink deeply, for the first time, from her udder.

This true story evokes the power of that mysterious force which seeks both healing, and more deeply, to express the innate oneness of life. That such healing occurred in The Weeping Camel had a lot to do with the openness and inter-connectedness of the animals and people, who recognise the need to support each other for their mutual welfare.  In the shedding of complication healing arose. No one “took action” instead, induced by music and a caring presence into a state of unified awareness, harmony was restored. The mother camel was able to feel the enormous pain of the birth and through her tears, she let it go.

A beautiful and instructive film.

Excerpted from Thanissara and Kittisaro’s forthcoming book, An Intimate World.

Spencer Martin: In this universe, all things are connected
Moon Shine