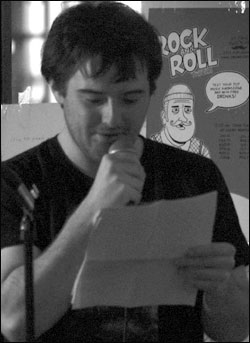 MORE THAN ONE-THIRD of adults in the United States (78.6 million people) can be considered obese, defined as at least thirty pounds overweight. As of 2009 not a single state could meet the rather modest goal of an obesity rate of only fifteen percent. Current projections say that by 2018 obesity-related health problems will cost the American healthcare system around 344 billion dollars every year, and that by 2020 the obesity rate will rise to forty-three percent.

In rather startling contrast, in 2009 approximately 925 million people worldwide were “living in hunger.” Due to the global economic crisis and the rising cost of food, that number is expected to do nothing but rise. Could one problem not solve the other?

The notion of cannibalism as a solution to society’s ills—particularly that of hunger—is nothing new. It has been a fairly typical response to famine—even in U.S. history, where the colonists of Jamestown are now known to have resorted to it—as well as the butchering of horses, dogs, and cats—to survive the winter of 1609.

In 1729, Johnathan Swift published “A Modest Proposal,” suggesting that cannibalism might offer a solution to the problem of excess children among the poor in Ireland, preventing them from becoming an economic burden to their parents or the country. Swift’s solution was quaint, but we live in a global community now, where our every action as a nation has a ripple effect unlike anything Swift, or Ireland for that matter, could have imagined.

If the U.S. is to keep its exceptional position as the light of civilization and leader of the free world, we will have to look beyond our national problems to the ones we face as a globe. How can we solve one of the world’s most daunting dilemmas—hunger—without putting undue strain on ourselves, or our resources?

If nearly a billion people around the world need food and we have nearly 100 million obese citizens draining the healthcare system, isn’t harvesting the latter to meet the needs of the former a win-win? As matters stand, hundreds of millions of pounds of American meat is going to waste—not doing its bearers, nor the hungry, any good.

I realize that some may oppose this suggestion on moral grounds. Those who do are presumably not among the hungry. Why not leave the moral considerations to those most directly impacted—the currently starving? The benefits to them would be enormous. The benefits to the U.S. would also be substantial. We could dramatically lower healthcare costs, while proving to the world that we can indeed make sacrifices. Indeed, we are a country that can lead the world in the new century.

As matters currently stand, nearly a billion people will die unnecessarily, while nearly 100 million Americans will endure the shame of obesity—all because of moral squeamishness. Rejecting this “modern proposal” is saying, in effect, “I don’t care about starving people. Let them die. I’m going to Denny’s.”

Worse, those who commit to non-action are betraying America and the future children of America. They, after all, are the ones who will have to pay those massive healthcare costs; who won’t be able to afford insurance; who will, as a result, not have access to healthcare when they need it.

Every second we don’t act is another second a child dies, when all that was needed to save him was the leg of a single overfed American.