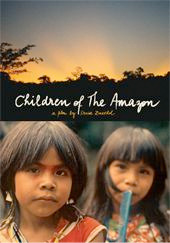 Children of the Amazon is a multiple award-winning documentary by Brazilian filmmaker Denise Zmekhol, who, in 2010, traveled a modern highway deep into the Amazon in search of the indigenous Surui and Negarote children she had photographed fifteen years before. Her journey tells the story of what happened to life in the largest forest on Earth when a road was built straight through its heart.

For countless generations, the Surui and Negarote people lived in the Amazon in what they called “forest time”— utterly beyond the realm of contemporary human life. Their only contact with the “outside” world was through rubber tappers, who first settled the forest in the 19th century and whose work did no harm to the trees.

Then everything changed: a highway was carved through 2000 miles of forest and the timeless world of the forest people was overrun by farmers, loggers, and cattle ranchers who clear-cut and burned the forest and decimated the natives through infectious diseases to which they had no immunity. Though nonviolent, the forest people are now in a battle for their very survival.

Zmekhol allows the forest people themselves to tell their stories through intimate interviews, to which she adds her own personal meditation on environmental devastation, resistance and renewal. The film’s central characters are the now grown children Zmekhol photographed more than fifteen years earlier: among them are Chief Itabira and Chief Almir, Surui navigating a risky course between cultural preservation and economic survival; and Chico Mendes, the legendary rubber tapper who organized a non-violent movement to save the forest and was assassinated by cattle ranchers.

As she nears the end of her journey, Zmekhol discovers how the combined efforts of indigenous people, rubber tappers, and their allies have begun to safeguard the rainforest. Ultimately, the film awakens us to our own intimate connection to this remote forest and its people: We are — all of us — Children of the Amazon — dependent upon her for oxygen, for atmospheric cleansing, for maintaining the balance that sustains all of life.

Children of the Amazon received a slew of awards the year it was released–from the Cine Golden Eagle Award to France’s Jules Verne Festival’s Best Picture and Youth Choice Awards to Best Documentary by the Indie Fest. The film can be purchased online in several languages for $25 USD for personal home use.