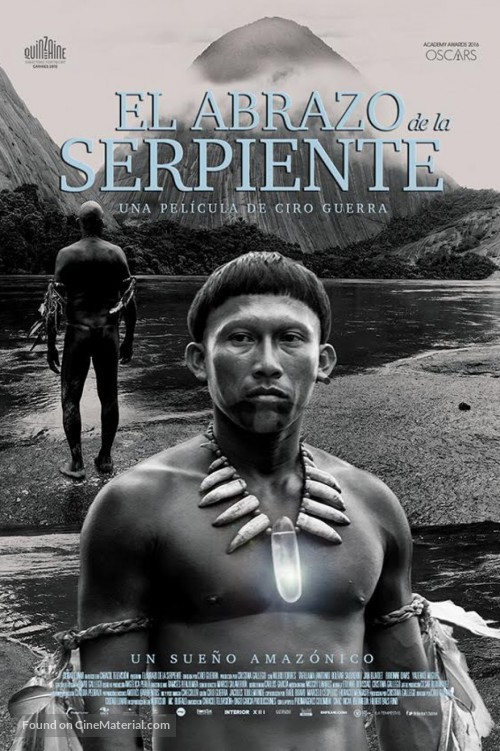 Embrace of the Serpent is an emotionally and visually stunning 2015 film by Ciro Guerra, shot primarily in black and white in the Amazon rainforest of Columbia. It traces the parallels stories of two scientists, one in 1909 and another in 1940, who each seek out an indigenous shaman, Karamakate, in hopes that he will lead them to a medicinal, psychotropic plant. The film explores themes of colonial exploitation of Native people and resources and the weight of materialism on the Western explorers, contrasting them with the powerful simplicity of Karamakate, who maintains his sense of identity, place, and purpose in the world, even though he has become the last remaining member of his tribe.

The film was acclaimed by both critics and the public, receiving a 98% approval rating, based on 118 reviews, from Rotten Tomatoes, with an average score of 8.4/10. Embrace of the Serpent also won the Art Cinema Award in the Directors’ Fortnight section at the 2015 Cannes Film Festival; Best Ibero-American Film Award at the 3rd Platino Awards; half-a-dozen other international film festival awards, and was nominated for the Best Foreign Language Film at the 88th Academy Awards.

The film is available on DVD and streaming from Netflix, Amazon, and other video platforms.

Other Movies You Might’ve Missed on indigenous wisdom, which The MOON has previously recommended, include:

Children of the Amazon, about the devastating consequences of a road through the jungles of Brazil, and The Great Dance, about the !Xo San Bushman hunters who, while running down their quarry, enter a trance state in which they become so attuned with the animal they anticipate his moves and feel his emotional state. Even before they ingest the animal physically, they have taken him in, spiritually. The film also displays the incredible wealth of knowledge the San people possess about the world around them.

The Blue Jewel is a film on Gaia and her healers—indigenous and Western—by German filmmaker Oliver Hauck, who asks, “What would our Earth be like if man would understand that he and the Earth are one?”

The quantum issue
The Earth speaks | The artwork of Andy Peterson