Though food is a favorite topic for feature filmmakers—from Babette’s Feast to Eat, Pray, Love–The MOON focuses on several excellent documentaries made in recent years that shed light on the current controversial state of our food system. 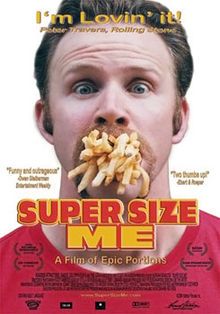 Super Size Me (2004) is a documentary directed by and starring Morgan Spurlock, an American independent filmmaker, who undertakes a thirty-day experiment eating only McDonald’s food—three times a day, consuming every item on the menu at least once. At the end of his experiment, the then-thirty-two-year-old Spurlock had gained more than twenty-four pounds—a thirteen percent body-mass increase—raised his cholesterol level to 230, and experienced mood swings, sexual dysfunction, and fat accumulation in his liver. It took him fourteen months to lose the weight gained from his experiment using a vegan diet. Though humorous, the film explores the fast food industry’s corporate influence, including its encouragement of poor nutrition for its own profit. The documentary was nominated for an Academy Award for Documentary Feature.

King Corn (2007) is a movie that illustrates just how literally we are what we eat. When two college friends decide to investigate why their hair samples reveal the presence of corn, their research turns up the presence of modified corn in virtually every processed food product on the grocery store shelves. They then turn to an examination of the food policies and agricultural methods that have resulted in Americans being full of corn.

Food, Inc. (2008) features Michael Pollan, whom The NY Times calls “the ethical epicurean,” and Eric Schlosser, author of Fast Food Nation, as the leading authorities in this horrifying exposé of corporate agriculture. What happens when a few multinationals control most of the food we eat, and produce it—with the help of government subsidies and the complicity of lax regulators—to be cheap, yet profitable? It isn’t pretty; it isn’t healthy; in fact it’s appalling. Warning: especially hard to watch if you love animals.