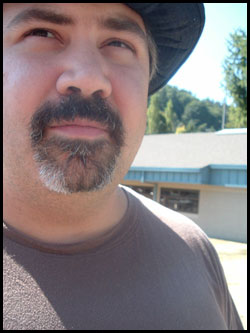 Because my sister has a talent for hitting things, Big Alabama decides she wants to be a drummer in a rock ‘n roll band like Led Zeppelin whose exploding blimp is painted on her jean jacket.

She wants to be like her hero Keith Moon who has an extended drum solo on one album so she runs out and purchases a set of drum sticks.

Unfortunately she can’t afford the drums also, and so Big Alabama has to practice on other things like pots and furniture and various kinds of fruit.

She practices for a week, and makes me listen, asking every so often if I can hear the music, and I say yes, of course, but I can’t hear anything except a stick hitting the leathery flesh of a melon or the loud moan of a garbage can lid being dented. Still, Alabama carries those sticks around with her, slashing them in the air like a pissed off Merlin, or maybe like a mad Sumo wrestler searching for a stolen bowl of noodles, and when she isn’t waving the sticks around she’s got them tucked into her back pocket like a strange tail.

This is the time Danny Cook is bullying me, and he traps me in an alley late one afternoon, moves in, and I do my best but he’s too tough.

He’s pushing my head against the brick wall and scraping my face back and forth, coloring my cheeks into chopped meat, when Big Alabama shoves one of those drum sticks into his ear, then drum rolls his face a couple dozen times until Danny Cook is running as fast as he can.

Big Alabama lifts me off the alley concrete, wipes the blood off my face with her tee shirt, and it’s then I hear music, not dumb rock ‘n roll, but a different song Big Alabama makes without the sticks; a beat Keith Moon can’t even imagine.