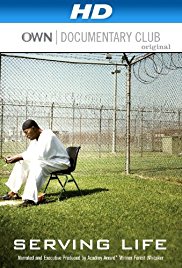 Serving Life takes viewers inside Louisiana’s maximum security prison at Angola, where the average sentence is more than 90 years. With such long sentences, 85% of inmates will never return to their communities or live in the outside world. They will grow old and die in Angola. To deal with that reality, warden Burl Cain in 1997 created an extraordinary hospice program to care for dying inmates. The program is staffed entirely by other inmates who, in serving others, often facilitate their own rehabilitation.

Emmy Award-winning TV news producer Lisa Cohen directed the film, and Oscar-winning Forest Whitaker signed on as executive producer and narrator. Serving Life premiered in the summer of 2011 on the Oprah Winfrey Network. The film won four awards for best documentary (three Christophers and one Humanitas), as well as four Telly Awards and a Cine Golden Eagle Award. This month’s interview subject Kelly Orians calls it one of the best documentaries ever made, “a true lesson in humility.”

“We’re supposed to correct deviant behavior, that’s what corrections is,” Cain says. “I can teach you skills and trades and I’d just make you a smarter criminal unless we get something in your heart — unless we become moral. The criminal person is a selfish person who gets whatever he wants by taking it. The way to be the opposite of that taker is to be a giver; the ultimate gift is to be the hospice caregiver.

“Hospice is a test,” he says. “Have you changed or have you not? This is your way to prove it.”

“If we can see someone who’s fallen to a certain degree, or committed certain crimes,” he says, “we can look at the failures and the pain of things that we don’t allow ourselves to forgive. To me, the ethical question starts to eliminate itself because it moves into a moral question, it moves into a universal question, a God question. A question of the universe and what our place in it really is — the biggest question, in some ways.”

Whitaker told an interviewer that the project also made him think about his own death, while the depths of compassion the inmates extend to each other made him question whether he’s living up to his own responsibility to be compassionate in the free world.

Serving Life is available on Netflix, Amazon, and various other platforms. 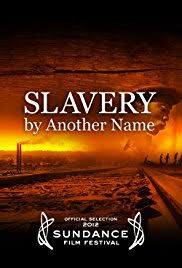 Slavery By Another Name is a 90-minute documentary based on Douglas A. Blackmon’s Pulitzer Prize-winning book illuminating how in the years following the Civil War insidious new forms of forced labor emerged in the American South, persisting until the onset of World War II. The film challenges one of Americans’ most cherished assumptions: that slavery in this country ended with the Emancipation Proclamation.

Slavery By Another Name shows how even as chattel slavery came to an end in the South in 1865, thousands of African-Americans were pulled back into forced labor with shocking force and brutality. It was a system in which men, often guilty of no crime at all, were arrested, compelled to work without pay, repeatedly bought and sold, and coerced to do the bidding of masters. Tolerated by both the North and South, forced labor lasted well into the 20th century. For most Americans, this is entirely new history.

Blackmon’s book, the complete title of which is Slavery by Another Name: The Re-Enslavement of Black Americans from the Civil War to World War II, won a Pulitzer for Non-Fiction in 2009. The award committee called it “a precise and eloquent work that examines a deliberate system of racial suppression and rescues a multitude of atrocities from virtual obscurity.” The documentary based upon Blackmon’s research was an official Sundance selection in 2012 and one of four projects featured as the Long Civil Rights Movement (together with The Abolitionists, The Loving Story, and Freedom Riders) as the centerpiece of “Created Equal,” a nationwide community engagement initiative of the National Endowment for the Humanities and the Gilder-Lehrman Institute of American History, designed to reach 500 communities between September 2013 and December 2016.

Slavery by Another Name can be watched on Vimeo, YouTube, and other platforms. The DVD can also be purchased from Amazon. 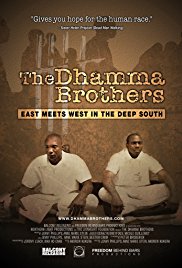 The Dhamma Brothers is a 2007 documentary about a prison meditation program at Donaldson Correctional Facility near Bessemer, Alabama. The film features four inmates, all convicted of murder, and includes interviews with guards, prison officials, local residents and other inmates, along with reenactments of their crimes. The film was directed by Jenny Phillips, a cultural anthropologist and psychotherapist; Andrew Kukura, a documentary filmmaker; and Anne Marie Stein, a film-school administrator. In 2008 Phillips released Letters from the Dhamma Brothers: Meditation Behind Bars, a book based on follow-up letters with the inmates. The film premiered on Oprah Winfrey’s Super Soul Sunday.

Director Jenny Phillips was largely responsible for the meditation program’s inception at the prison. Phillips had previously studied prison culture in Massachusetts. In 1999, when she heard that prisoners at Donaldson were practicing meditation, she organized the prison’s first 10-day intensive retreat there in January 2002. Phillips believes it was the first time a 10-day retreat had been held in a United States maximum-security prison.

The meditation practiced was Vipassana meditation as taught by S.N. Goenka. The first 10-day intensive at the prison was attended by 20 inmates. The film, however, features material from the second 10-day retreat, held in May 2002 with 37 inmates, and a follow-up three-day retreat and interviews in January 2006. Each retreat consisted of a rigorous daily schedule and was held in complete silence. Convicted murderer Grady Bankhead described the retreat as, “tougher than his eight years on Death Row.”

Donaldson’s meditation program was terminated shortly after the second retreat. According to New York Times reviewer Whitney Joiner this was because the prison chaplain complained to administrators that he was losing his inmate congregation. In December 2005, the prison administration changed and the meditation program began again. The program has continued with only minor interruptions at Donaldson since.

The film received generally favorable reviews from critics. Jack Brown of the Valley Advocate rated the film four stars, although a Village Voice reviewer complained that the crime reenactments were “cheesy” and “half-assed.” The film also includes interviews with local residents who viewed the program negatively, perceiving it as anti-Christian and even likening it to witchcraft.

The film tied for Best Feature Documentary at the Woods Hole Film Festival in 2007 and was a PASS (Prevention for A Safer Society) Award Winner in 2007 from the National Council on Crime and Delinquency. It can be streamed online via iTunes and DocuSeek2 and is available on DVD from Netflix and Amazon. Phillips’ most recent project is Beyond The Wall, which documents the many challenges and barriers facing formerly incarcerated persons as they attempt to rebuild their lives “beyond the wall.”

We need to talk about an injustice

In this hugely popular TED talk, which boasts nearly 5 million views since 2012, human rights lawyer Bryan Stevenson shares hard truths about America’s justice system, starting with its massive imbalance along racial lines: a third of the country’s black male population has been incarcerated at some point in their lives. These issues, which are wrapped up in America’s unexamined history, are rarely talked about with this level of candor, insight, and persuasiveness.

The talk was originally presented at an official TED Conference and was featured by TED’s editors on the home page.