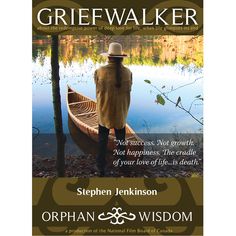 Griefwalker is a documentary by director Tim Wilson about the work of Stephen Jenkinson, for years the leader of a palliative care counseling team at Toronto’s Mount Sinai Hospital. Through his work in “the death trade,” as he calls it, Jenkinson has presided at the deathbed of more than 1,000 people where, too often, he witnessed a “wretched anxiety and an existential terror” even when there was no pain. As a result, he has made it his life’s mission to change the way we die: to transform our denial and resistance—our “death phobia”—into acceptance of death as a grief-filled, but essential part of life.

Here’s what one commenter wrote about “Griefwalker”: Watching “Griefwalker” helped me to open my eyes that I have been living as though I am going to die. That is how I have become so selfish. I stopped caring about life around me. I lived as though death was a punishment and I retaliated against life. I think that always knowing that I was going to die made it okay for me to become selfish and abuse life, people, drugs, alcohol and time. …It is time, right now, to start living selflessly. To look forward to living well and also looking forward to dying well. There are a hundred thousand ways to live well, but there is only one way to die well: To die how I lived. That will leave a good example for the living. And today I do not have to live as though I am dying because it is not time to die yet. It is time to live. I will no longer be consumed by the fears I have always had about death. I will always look at death now just as I now look at life; as though it is good.”

Griefwalker is available on Netflix and other platforms and can be streamed for free on the National Film Board of Canada site. 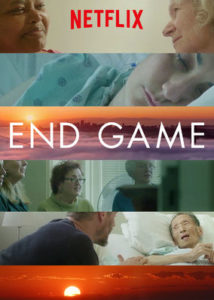 End Game is a 2018 Oscar-nominated short documentary (40 minutes) about three different palliative care providers who help patients and their loved ones come to terms with death’s approach and choose how they will deal with it. The film focuses on the work of the palliative care team at UCSF Medical Center; the volunteers and providers at Zen Hospice Project; and B.J. Miller, MD, a physician who lost three limbs in an accident when he was 19 and who has worked with both UCSF and Zen Hospice. As a New York Times reviewer wrote, “End Game urges viewers to think about our last days on Earth not as a heartbreaking tragedy but as an opportunity for true closure.”

The film includes us in the painful and intensely intimate moments when people learn their remaining time here is short and that goodbyes are imminent. Nevertheless, as the International Documentary Association wrote, “As difficult as it was to watch people go through this really devastating piece of their lives, there was just so much caring and loving that it actually became a very beautiful experience for us.” This is, of course, the gift that death can offer us, when we approach it with hearts wide open.

End Game was produced, directed, shot, and edited by Rob Epstein and Jeffrey Friedman, who also worked together on Common Threads: Stories from the Quilt. Epstein previously won an Oscar for directing the groundbreaking documentary The Times of Harvey Milk (Sundance 1985). Other producers include Rebekah Fergusson and William Hirsch and executive director Shoshana Ungerleider, MD, a hospice and palliative care physician, advocate, and philanthropist.

The film can be streamed on Netflix.

Bill Arnott | Death of a boy, a father, a friend
Atonement | The Power of Making Amends