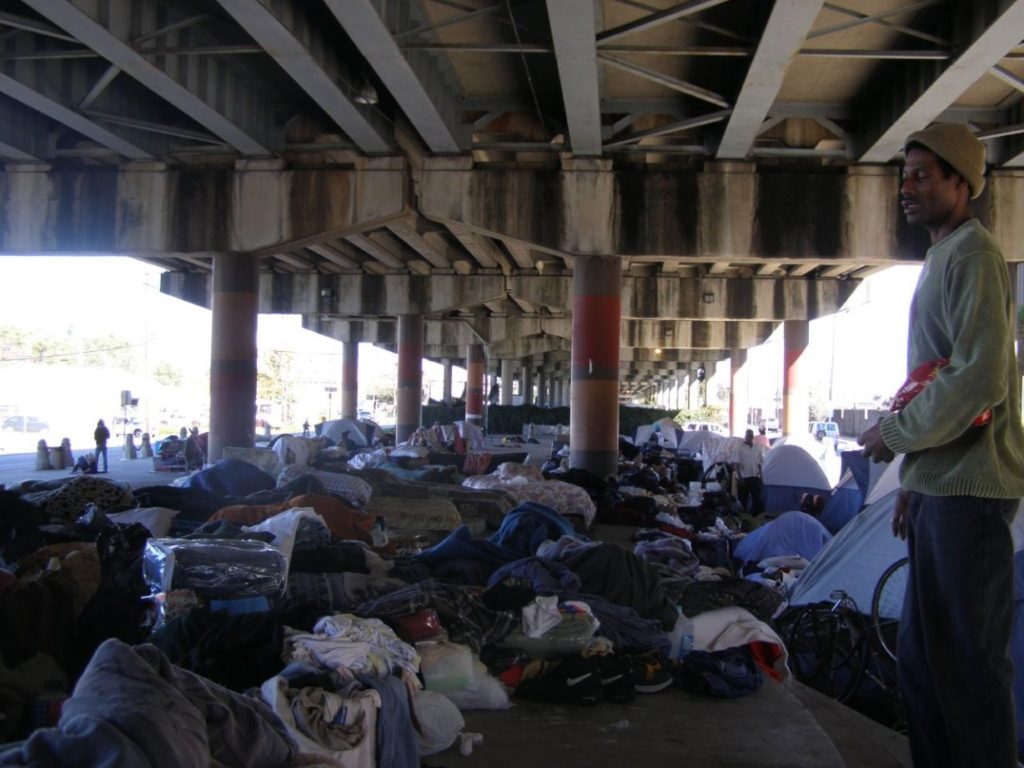 In the early evening sunlight
the iron planks over Old Hennessey Bridge,
cast jail-bar shadows on the riverbank—
a fearful illusion for those sojourned there: the waywards:
free of charge, obscure, perishable, beneath the trestles.
The rundown backstreet leading to their hidden path
backs up to the pumping station, abandoned shopping carts,
and assorted dumpsters.

Under the bridge’s refuge, the stink of tar and urine floats up
on hot dampish nights. Some of the dubbed leaders take turns
keeping watch: from the top, from the bottom,
from behind, from sideways. Chasing their own eyes,
the foreboding ones make up for the oblivious.

Reduced to a basic fate, the wayward lot seems to be guilty of
bad luck, a chance stolen, pain, genes, or a choice ignored.
They are in a place where a next day offers more nothing—
nothing begets nothing. Fitting sometimes of this place,
Old Hennessey’s, Midtown. Or maybe not.

Midtown came out early with its friendly aura and cleanly guise.
It later devolved to ugly stares, look-aways,
the phony, “God bless you,” and the soulless, “Get a job.”
Midtown, a place of mixed kindnesses, false beliefs, and
weeping pepper trees. Yards of backstreets merging into ample
manicured neighborhoods where neighbors are aloof, friendly, or
giving, depending.

Yet, existence can continue quite undisturbed in the encampment
under the bridge—extending over weedy jasmine and bulrushes
along the riverbank. Like modern sculptures the patchwork blots of
primary colors and faded gray are kept camouflaged
along the path. Makeshift add-ons, demarcations, scrawlings
on the buttresses with anti-everything—mark the territory.

The Midtown uptowners brave enough to stroll the evening heat
above the stained abutments, don’t always notice much
beyond their preoccupation of daily-meshed concerns:
potholes in front of Lady of the Lake, Old Hennessey paver repair,
the annual John Deere mower sale, those charitable kids who sell
candy bars to stock the Midtown Library. Fitting for the
uptowners who favor a river walk in upper mid-town
on a hot dampish night.

A festival of daytime Midtown uptown residents can be seen
at the farmer’s market on Fifth Street, where they mix with the
other-lookers and out-of-towners. They engage or ignore
the waywards who drift far and close. Mixed with friendly
repartee, the street tribe’s caution can delay any would-be
handouts. Luckily, for the after-dark waywards, there are
always those lovely dumpsters: abundant with choice
watermelon, soft tomatoes, and hard bread double-packed
with a bin of near-rancid honey butter.

Once again, the day recycles to the early evening sunlight.
Those jail-bar shadows on the riverbank are transformed into
cubistic arches—more soothing to the shame-ridden waywards.
They wait for the night to take the baton when Midtown streetlights
illuminate a changed effigy. Or maybe not.
How do the some rally their hope, as they climb down the trestle
path with bags of treasured somethings? Does the mascot mange
drop his nightly stash of a half-full Snapple bottle, a punctured
ketchup pack, and a soleless tennis shoe—in hope for a playful fetch?
Maybe tomorrow.

Maybe, at last, the some find a resonating comradery at Old Hennessey Bridge.
It is prized property for those who want to rest a while, to feel the land, to
feel the air—to seek sunlight on their faces and a means to keep on.
But some hoped for a sign—Welcome to Midtown—it said.
Maybe in Midtown they can still find where they are going.

Vicki Miko is a retired television producer and founder of EONetwork Productions multi-media. Her video series, Opposing Viewpoints Live Radio for Television and 2nd Opinion, were funded and distributed by the award-winning academic publishers, Greenhaven Press / Gale-Cengage Learning (formerly Thomson Learning – Thomson Reuters). Her illustrations have been featured in Billboard Magazine and displayed on Nagle Outdoor billboards. As a community volunteer, she was nominated for the McKnight Foundation Art Award for creating gardening workbooks for the JD Rivers’ Children’s Garden (Minneapolis). She lives in Southern California. www.vickimiko.com