She lives | An interview with Jean Shinoda Bolen 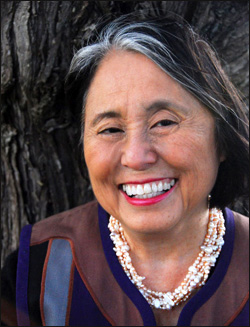 Jean Shinoda Bolen, M. D, is a psychiatrist, renowned Jungian analyst and an internationally respected author and speaker, who has written thirteen books in over eighty translations. These include The Tao of Psychology, Goddesses in Everywoman, Gods in Everyman, Ring of Power, Crossing to Avalon, Close to the Bone, The Millionth Circle, Goddesses in Older Women, Crones Don’t Whine, Urgent Message from Mother, Like a Tree, Moving Towards the Millionth Circle and her most recent Artemis: The Indomitable Spirit in Everywoman. The 30th anniversary edition of Goddesses in Everywoman and the 25th anniversary edition of Gods in Everyman were published in 2014. Her work brings an awareness of the psychological and spiritual dimensions to all aspects of life. A spiritual feminist, she credits the Women’s Movement with facilitating her ability to graduate from medical school and pursue her career in psychiatry. Like Jung, Bolen attempts to inform us of the powerful effects of archetypes on individuals, families, and cultures.

A Distinguished Life Fellow of the American Psychiatric Association, she is a former clinical professor of psychiatry at the University of California at San Francisco, a past board member of the Ms. Foundation for Women and of the International Transpersonal Association. She was a recipient of the Institute for Health and Healing’s “Pioneers in Art, Science, and the Soul of Healing Award” and is a Diplomat of the American Board of Psychiatry and Neurology.

Dr. Bolen has also been featured in three acclaimed documentaries, the Academy-Award winning anti-nuclear proliferation film Women – For America, For the World, the Canadian Film Board’s Goddess Remembered, and Femme: Women Healing the World. The Millionth Circle Initiative was inspired by her book and led to her involvement at the United Nations. She is Permanent representative of Pathways To Peace and the initiator and the leading advocate for a UN 5th World Conference on Women, which was supported by the Secretary General and the President of the General Assembly on March 8, 2012.

Dr. Bolen spoke with The MOON for an hour by phone.

The MOON: What is the divine feminine? What is she like? What attributes does she have?

Bolen: “Divine feminine” covers a lot of concepts and feelings. There are many, many goddess archetypes from virtually all cultures of the Earth. In Buddhist cosmology we find Kuan Yin, the goddess of mercy and compassion—who is very much cut from the same cloth as Mary, the mother of Jesus in Christian theology. In Hindu culture we find Sarasvati, the muse who inspires all music, poetry, drama and science; as well as Parvati, the wife of Shiva and mother of Ganesha; Lakshmi, the goddess of wealth and prosperity; Durga, the warrior goddess who defends against evil; and Kali, the destroyer, who gets rid of that which no longer serves and paves the way for new life.

In Western culture we are very much influenced by the ancient Greek and Roman goddesses: Aphrodite, or her Roman counterpart, Venus, the goddess of love; Demeter (Ceres), goddess of agriculture; Artemis (Diana), goddess of the hunt and of nature; Hestia (Vesta), goddess of the hearth, and so on. In Jungian terms, these women are not so much deities or personalities to be worshipped, yet it’s important to recognize that all of these goddesses—and many more—were once part of myth and religion. They were worshipped for thousands of years—since before the patriarchy said that there is only a divine masculine. They are now latent patterns in the collective unconscious, waiting to be reimagined and made a conscious part of ourselves.

The divine feminine is not a crossed-dressed version of the masculine deity; goddess is not god in drag! Her attributes are different. My sense is that most people who feel connected to the divine feminine find her through their response to beauty in nature or a body-soul response to her presence as subtle energy in a relationship to a person or a place, while the divine masculine is more often sensed as transcendent spirituality, an experience of spirit, which has evoked worship. Both are numinous and personal , inspire awe and have an ineffable component, beyond words.

When the goddesses and their attributes were assimilated, trivialized, and demonized—when God was made only male—women were left with nothing to identify with. Divinity was made “Other,” and feminine qualities were not associated with it. Throughout my career I have sought to understand and communicate the relationship between the destruction of goddesses and the treatment of women; the effect of the absence of a sacred feminine on women’s spirituality—indeed, on spirituality for both genders—and the cultural, environmental, and global consequences of a theology that denies the legitimacy and worth—the sanctity—of the feminine, of the sanctification of matter, of a divine mother.

The MOON: Why are we so ill-acquainted with the divine feminine? Why have we been taught that God is masculine?

Bolen: We’ve been taught that God is masculine ever since the dawn of Western civilization. The major religions of the world are headed by men who say they speak for God, with the scriptures setting down the prescribed beliefs, which often have been taken literally. These revelations came through a numinous experience of a prophet or mystic. They came to a man who to responded to God as an awesome father figure. I don’t question or doubt the power of these experiences; however the information that came through usually had a lot to do with laws. For example, the Abrahamic religions—Judaism, Christianity, and Islam—were born from Abraham coming down from Mt. Sinai with the Ten Commandments. There’s typically a strong judgment component in male-based religions. This is very different from the experience of the divine feminine who, in most of her embodiments, is seen as a compassionate, or motherly, deity; one who nurtures rather than judges.

But, as I’ve said, the divine feminine has largely been displaced, overthrown, and forgotten.  In many ways, the story of the Greek goddess, Metis, is a metaphor for what befell many goddesses, particularly in western Judeo-Christian culture.

Metis was the daughter of two Titans and part of the ruling order of divinities prior to the Olympians. She was pursued by Zeus and was his first consort. Her name means “wise counsel,” which is what she offered her husband, enabling him to succeed in defeating his father, Cronus, and becoming the supreme deity.

When Metis became pregnant with Zeus’s child, an oracle told him that this child would either be a daughter with courage equal to any man, or a son with an all-loving heart, who would supplant him and rule over the gods and men. To prevent the possibility of having a son who would do to him what he had done to his own father, Zeus tricked Metis into becoming small, and then he swallowed her. This became the end of Metis as a goddess in classical mythology.

This is a powerful metaphor. The wise feminine—a deity in her own right—was tricked into “becoming small” and was absorbed by her husband–a parallel to what still happens to many women today.

She lives | Movies that celebrate the divine feminine
Tim Ward | Why would a man search for the Goddess?