School, to me, is life. The space within the four walls of the classroom has always been the haven of my soul. I took summer school again last July, as I had always done. This time it was social studies in the morning and math in the afternoon. They each took three hours, with a short break halfway. The break for my socials class was from 9:30 to 9:45; for my math class, it was from 1:45 to 2:00. Lunch occurred between the two courses.

My math teacher had a nice side but, like many people, she had two edges to her.

It was about a few days in that the darker side — the Hyde side — of her personality emerged and her hatred of the stealthy entrance of late students blossomed into something wicked.

It was on a Friday, I remember, when she promised that she would take to some shadowy measures to punish late students.

We all thought it was an empty, idle threat, but she kept her word the very next Monday.

One must first know that the door to the math classroom opened outwards — into the hall, and that there was no lock on the door at the time.

At break on that Monday I was roaming the hallways. At a minute to two, I went back up the stairs to my math class. Students from other classes were still meandering about. I thought I was on time. No bell rang during the summer, which did not help matters.

The door to the classroom was closed. That was new. I grabbed the handle and twisted it. I got no further than that. The door — which I knew wasn’t locked — refused to be opened, much to my dismay. Then I realized that someone was holding on to it. I could also hear the teacher speaking to the class.

Then I saw through the blinds who it was: her, the math teacher. She was keeping me outside with pure brawn while teaching at the same time. Talk about multitasking.

I released the door handle, waited for a few seconds, and pounced.

Seizing the handle and putting a foot against the doorjamb, I pulled as hard as I could. If she was going to play tug o’ war, I was more than happy to oblige.

I sensed her straining to keep the door securely in place. I tugged so hard on the door that it opened a crack and I received a death glare from the teacher. I froze and let go.

A short while later, she opened the door out of pity. All eyes were set on me when I entered; I just about died.

Now that I was inside, I saw how she’d done it. She held on to the handle and leaned forward with her back to the door in a lunge stance. We were told that there were still students missing, so she kept her battle position. I silently comforted myself — I was not alone in this.

The handle jiggled a bit later. The teacher stood her ground, ignoring the students outside and continuing her lesson. The students then decided to play nice: they knocked.

Immediately the students were allowed in.

If only I had given the door a polite tap I would have been bidden entrance instantly. I fumed, rather shame-faced.

On Wednesday, the teacher herself was late. We waited for five minutes before proceeding with our consensus: we would keep her out this time.

We dispatched two volunteers to do the dirty work. One held the door in place. The second stood guard by the blinds.

We did not have to wait long.

The door jolted. Volunteer number one managed to keep the door securely shut, his muscles exerting themselves full steam ahead. And then both students waved and grinned at the teacher through the blinds. This continued for a minute before they abruptly left their posts and flew back to their seats.

The door opened. The teacher entered, a cup of coffee in hand. She glided into the room, glowering with shame of her own.

We all smiled at her, trying to win back her good graces. Some did not succeed, of course: the two volunteers were promised harder tests. I feared for their well-being, but they paid her little attention. They were, most likely, secretly congratulating themselves on their success at exacting revenge. 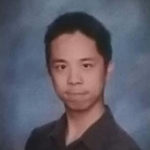 Shawn Chang is a 17-year-old writer based in Canada. He can be reached on Twitter @sad_cypr3ss.