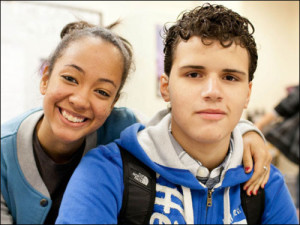 THAT HURRICANE SEPTEMBER had started like every school day of every school year of our lives: Mom rousting Julian and me by breezing into our upstairs bedroom singing “Rise and shine,” a phrase that was all the more annoying because of her good cheer. She’d slide open the louvered doors of our closet and pull out clothes, hold them up briefly for our approval, then order us out of bed and into the bathroom to wash our faces and brush our teeth.  Her good mood would evaporate if we lingered too long in bed “dilly-dallying,” so we kept our groans and protests to a minimum and jostled each other to be first to the toilet. I had friends who were shocked that Julian and I—both just starting seventh grade this year—slept in the same room and even peed in front of each other. But we’d done it all our lives. Seemed perfectly natural to us.

By the time we clattered down the wooden staircase, Mami Luana was waiting with our breakfast of fried ham and cheese sandwiches and tiny cups of sweetened black coffee.  She cuffed us good naturedly for making such a racket; still, her smile let us know that her morning didn’t begin until she laid eyes on her grandchildren. Mami Luana was Papi’s mother and had lived with us for as long as I could remember—ever since her husband died in a construction accident working for Papi. Now our older brother Ramon worked with Papi and they left the house before seven, usually returning before five.

We ate all our meals in the breakfast nook off the kitchen because Mom used what was supposed to be the dining room for her office. If there were too many of us to squeeze around the old pine table opened up to its maximum, we’d take the table outside to the covered patio—or turn it sideways so that it extended into the den. That was kind of a metaphor for our family. We reconfigured what we had to fit what we needed.

Today was Friday—the end of our first week at Kastle Junior High and High School. Mom still packed lunches for us, drawing pictures on the bags with a black marker. Today my picture was a mermaid; Julian’s a Batmobile.

Mom laughed and drew a big circle with an X through the Batmobile. “There! Is that better?”

“Give me that,” said Julian, snatching the bag out of her hands and dumping his lunch onto the table.

“Hey, hey, hey!  Esperate, muchacho!” Mami Luana scolded. “I guess it’s time for you to start making your own lunches if you don’t like the way your mother does it!”

“The lunch is fine. I just don’t want a picture on the bag!” Julian grabbed another bag out of the drawer and slammed it shut for emphasis.

“Not because he hates my art; because he’s growing up on me,” she explained.

Mom laughed, pushing us toward the door.

“Got your backpacks? Do you have your homework? Are you coming straight home after school, or do you have plans? It’s Friday. Maybe I’ll rent us some movies and make tacos, or order pizza. What do you say?”

“I just want salad.” I tilted my face for a kiss.

“Not for me,” Julian protested. “Sausage and pepperoni!”

“I know, I know. I got it,” Mom smiled. “Meat for my little hombre and vegetarian for my little cupcake. Have a good day at school. Kick butt!”

Mom always told us to “Kick butt.” She didn’t mean it literally, of course.  Mom hated fighting.  She never even let our older brother Ramon and Julian play violent video games, despite their insistence that, “Mom, it’s just a game! It isn’t real!” “Kick butt” was just her way of telling us to be confident, get out there, and do our best. To make it a good day.

I followed Julian out the door, stepping from air-conditioned comfort into the already sticky September air. Thank God it was Friday. This had been the longest school week of my life.

We were sweating by the time we rounded the corner, but it was just another few blocks to the air-conditioned school. My best friend Jasmine, who lived on the street behind us, was waiting for us up ahead. She’d undergone such a transformation in just the last week that I hardly recognized her this morning—her glossy black baby fat seemed to be redistributing itself into voluptuous curves almost before my very eyes. I could hardly keep from staring at her chest—and neither could Julian.

“Hey Jazz,” I said, feeling strangely alienated from her.

“Hey Jess,” she smiled right back, then did a double-take. “Ya’right?”

I shrugged and turned my face away. What was the matter with me? Did I think Jasmine had gone and got breasts to hurt me? Nevertheless, as we got closer to school and joined the throngs of kids getting off of school buses and out of cars, I felt the balance of power subtly shifting between us, like sand under my feet as the tide went out. Many of the boys eyed Jasmine appreciatively, pointedly ignoring me. At our mostly white elementary school I’d been Jasmine’s entrée with the white kids, since I was half-white myself. Now I felt myself clinging to Jasmine for validity among the black kids—the majority population at Kastle.

Julian caught up with a group of his friends and peeled away from us. Then Jasmine and I parted ways, heading to our separate homerooms. I passed one after another shocking group in the halls. I was a child surrounded by bombshells with cleavage, piercings, painted nails, tattoos, and heavy eyeliner. I could only stare in wonder. Were these girls only a few years older than me? I felt like the wrong species.

The boys, too, were tall and broad-shouldered, self-confident and menacing. A few sported chains and punk-rocker spikes in their hair. Worst were the jocks, who leered openly at girls in the hall and scanned me with disdain when their eyes chanced to fall in my direction.

“Look, it’s a kindergartener!” one blond, athletic type said to his friends, in a tone that made me hug the wall, clutching my books protectively to my chest. “She’s not even ready for a training bra!” Their laughter burned my ears as I shouldered past them.

As if it was any of their business.