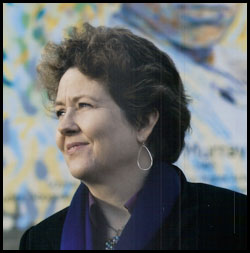 Something rubbery and heavy pressed to his lips. He strained for a sound that would measure the distance between him and the army. Surely, he would have time to hide. The soldiers had paused to eat, he guessed. Jesson sniffed for smoke, but only caught alcohol and a meaty whiff of blood.

“Water,” Jesson said. Or thought he said, since no sound emerged. Water, he thought. Suddenly, water coated his swollen lips: cool, wonderful water, with a bright lemony flavor. He held up a hand and there was Evie: her long, warm fingers, the perfectly rounded nails. Again, water brushed his lips. He opened his mouth and in came a small, ridged sponge on a stick. A lollipop of water.

Every morning, he swam thirty minutes in the lap pool in the engineers’ quarters. Through the dome, Mars’ fractured moons were like two red thumbprints. Evie exercised nearby with an instructor who played the dance music she and her friends liked.

Surely, Evie heard the army. Booted feet tramped. “How much longer?” he asked.

She snuggled against him. Before bed, he read to her that way. He could never skip forward or miss a page. Even after Evie learned to read, she preferred Jesson to read to her. She loved fairy stories and anything with animals. Since leaving Earth, the only real animals she had seen were pets or the lions and monkeys in colony zoos.

On Mars, Evie had a thorot. The creature slept with her at night, its soft, brown tail curled around her shoulders. Jesson bought the thorot after Karen died. “Panta,” Evie named it. The housekeeper hated Panta, muttering every time the thorot snuck scraps from the waste chute or left a smear of white excrement on the floor. While Evie was in school, Panta hid.

“You spoil her!” the housekeeper accused him. Jesson remembered the mole on the woman’s upper lip. But he couldn’t come up with her name. He didn’t like her, but she fed them well and kept their quarters spotless.

“What was her name?” he asked. Karen told him he needed to be nicer to the help. But he didn’t care about the help. He only cared about her and Evie. Now, only Evie mattered.

“He’s awake.” This wasn’t Evie’s voice. Still, he could feel his daughter pressed to his side.

Jesson struggled to pull open his eyes. How his head ached!

“Dr. Jesson.” A cool hand stroked his forehead. Perhaps the soldiers were sleeping. “You are on the Septima Clare. Do you know what day it is?”

“Septima Clare.” He wanted to be chief engineer on the Septima Clare, the most advanced cruiser in Orcox’s fleet. But that would be hard on Evie. She had lost her mother. If he accepted the post, she would lose her father, too. Even at light speed, missions could last years. Evie would be a woman by the time he returned to Mars.

“No,” he replied. He couldn’t be on the Septima Clare. Was Evie at her dance lesson? He was late for work. The Orcox dome was only 15 minutes from their quarters. He needed to catch the tram.

“Today is March 15. I’m Dr. Clark. Can you tell me your name?” Jesson didn’t like Dr. Clark. No one did. The man’s first name was Richard, so everyone called him Dr. Dick. Dr. Dick would refuse to issue a sick pass or write you up for some minor thing, like a heart murmur or the sniffles. Twice, Dr. Dick had refused Jesson’s request for a home pass. Jesson smelled the menthol tablets Dr. Dick constantly sucked on.

Jesson felt a sickness in his gut. The last thing he remembered was sampling a gas and dust-filled cloud that nursed developing stars. The cloud was nowhere near Mars.

“Jesson,” a man said, waking him. Standing next to his bed was a man with the smooth, brown skin of an Indian. “Who is the president, Dr. Jesson?”

What did that have to do with the army? It felt like the soldiers had jammed their tent poles into his brain. He saw flashes of light, just like the meteor shower he once encountered as a young pilot. That was before Evie, before even Karen. One minute he navigated black space and the next his warning sensor shrieked as fireballs flamed through the mesosphere. The small ones skipped like stones on a pond while the larger ones streaked toward the ground, trailing shards of rock that spattered his hull. He thought he would die, but didn’t. Later, Jesson ran his hands over the pocked shroud, marveling at his luck.