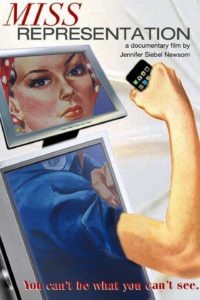 Miss Representation is a 2011 documentary written and directed by Jennifer Siebel Newsom that exposes how mainstream media and culture contribute to the under-representation of women in positions of power and influence in America. With the tagline, “You can’t be what you can’t see,” the film draws attention to how limited and often disparaging are media portrayals of women and girls.

As the film’s website explains, “In a society where media is the most persuasive force shaping cultural norms, the collective message we receive is that a woman’s value and power lie in her youth, beauty, and sexuality, and not in her capacity as a leader.” Just as damaging, boys learn that their success is tied to dominance, power, and aggression. The film encourages valuing people as whole human beings, not gendered stereotypes.

While women have made great progress over the past few decades—particularly in the November 2018 election, when a record 112 women were elected to Congress, up from the previous record of 107, women still comprise only a quarter of both houses, rather than half, as their percentage of the population would suggest. In January 2018, the United States placed 99th globally in terms of percentage of female legislators or parliamentarians—particularly weak compared to other Western countries and two spots below even Saudi Arabia. And it’s even worse outside of government. Women make up only 5% of Fortune 500 CEOs and 17% of directors, executive producers, writers, cinematographers, and editors working on the top 250 domestic grossing films.

Miss Representation reveals this state of affairs through interviews with women who have found success “in a man’s world,” including Katie Couric, Rosario Dawson, Gloria Steinem, Condoleeza Rice, Margaret Cho, Rachel Maddow, and Nancy Pelosi, interwoven with stories from teenage girls who struggle with depression, poor body image, and even suicide (in 2014 the number-one cause of death, worldwide, for girls 15-18).

Miss Representation previewed on October 18, 2010, at an awards luncheon hosted by the San Francisco Commission on the Status of Women. It then premiered on January 22, 2011 at the Sundance Film Festival, where it was nominated for the Grand Jury Prize, followed by screenings at the Athena Film Festival at Barnard College. It was an Official Selection at eight film festivals and won the 2012 Gracie Allen Award for Outstanding Documentary. It is available for viewing on various platforms, including Netflix, Amazon, iTunes, and others, and can be streamed for free online at DocumentaryLovers.com. 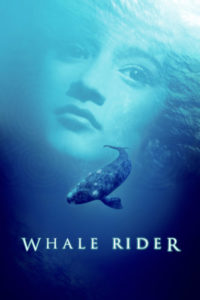 Whale Rider is a 2002 feature film from New Zealand about a young Maori girl who overcomes her grandfather’s scorn and rejection to step into her own understanding of her destiny. From the film’s website:

In a small New Zealand coastal village, Maori claim descent from Paikea, the Whale Rider. In every generation for over 1,000 years, a male heir born to the Chief succeeds to the title. The time is now. The Chief’s eldest son, Porourangi, fathers twins—a boy and a girl. But the boy and his mother die in childbirth. The surviving girl is named Pai. Grief-stricken, her father leaves her to be raised by her grandparents. Koro, (the Chief) refuses to acknowledge Pai as the inheritor of the tradition and claims she is of no use to him. But her grandmother, Flowers, sees more than a broken line, she sees a child in desperate need of love. Koro, too, learns to love the child. When Pai’s father, Porourangi, now a feted international artist, returns home after twelve years, Koro hopes everything is resolved and Porourangi will accept destiny and become his successor. But Porourangi has no intention of becoming Chief. He has moved away from his people both physically and emotionally. After a bitter argument with Koro he leaves, suggesting to Pai that she come with him. She starts the journey but quickly returns, claiming her grandfather needs her. Koro is blinded by prejudice and even Flowers cannot convince him that Pai is the natural heir. The old Chief is convinced that the tribe’s misfortunes began at Pai’s birth and calls for his people to bring their 12-year-old boys to him for training. He is certain that through a grueling process of teaching the ancient chants, tribal lore and warrior techniques, the future leader of their tribe will be revealed to him. Meanwhile, deep within the ocean, a massive herd of whales is responding, drawn towards Pai and their twin destinies. When the whales become stranded on the beach, Koro is sure this signals an apocalyptic end to his tribe. Until one person prepares to make the ultimate sacrifice to save the people: the Whale Rider.

Directed by Niki Caro, this beautiful film shows how a young girl’s courage, defiance, and commitment to loving her grandfather, despite his repeated rejections, eventually wins him over. Nominated for a slew of festival awards, the film won the Independent Spirit Award for Best International Film, Critics’ Choice Movie Award for Best Young Performer, Keisha Castle-Hughes. It is available on all the usual platforms.

Too late to review, but two films I’d like to see are:

Iron Jawed Angels (2004) From another reviewer: You already know about the glossy big-screen Suffragette. [Actually, I find most Americans woefully ignorant of the brutality of American women’s struggle for votings rights.] But Katja von Garnier’s small-screen Golden Globe winner, about the women who risked their lives for the suffrage movement, should also get your vote as a top feminist film. Plus, it stars Hilary Swank, Anjelica Huston, and Vera Farmiga. The film can be streamed on YouTube here. 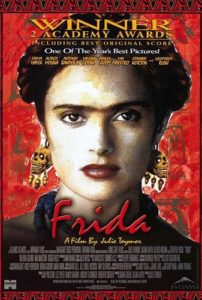 Frida, Julie Taymor’s 2002 film about the life and times of the iconic Mexican artist, whose life was painful on so many levels, but who persevered in living life on her own terms.