I DON’T KNOW whether it’s sad or silly that most movies about the possibility of life after death are horror movies–or at best, romances, like the Demi Moore- and Patrick Swayze-starring “Ghost.” Rare exceptions include Movies You Probably Saw “Flatliners” and “The Sixth Sense.” Although the latter portrayed “the undead” in rather terrifying ways, it made the point that these spirits were not malevolent; they were seeking help. The two films reviewed below, however, treat near-death and beyond-death phenomena seriously–with hopeful implications for all of us who consider ourselves “mortal.” 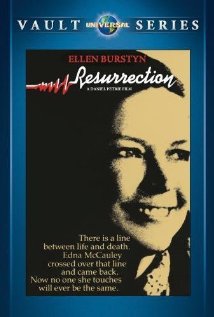 In the classic 1980 film Resurrection, Ellen Burstyn plays a woman who has a near-death experience as a result of a car accident that kills her husband. When she recovers, she finds that she has acquired miraculous healing abilities —which are welcomed gratefully by those she helps but become a source of conflict between herself and her new lover (Sam Shepard), who wants to ascribe her abilities to Christianity and is angered when Burstyn insists they are simply the result of love. Although the tension between Shepard and Burstyn provides the drama for the movie, for me the most memorable and meaningful aspects of the film are the down-to-earth depiction of a near-death experience and one of their common after-effects, the ability to heal. Skeptics may be surprised to note that The New York Times gave the movie a glowing review and the film was nominated for several Academy Awards—including Best Actress for Burstyn’s performance and Best Supporting Actress for Eva La Gallienne, who played Burstyn’s grandmother. 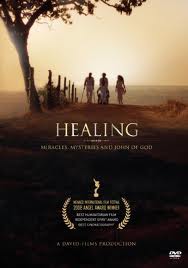 Healing: Miracles, Mysteries, and John of God is a 2007 documentary about João Teixeira de Faria, also known as “John of God,” the miracle healer of Brazil. Although the film is not about death—quite the opposite—I’m including it here because the man known as John of God is a humble peasant who doesn’t claim to have any healing powers. He “simply” makes his body available to other entities—all of whom are “dead”—so that they can heal the thousands who flock to Abadiana, Brazil, for that purpose. Although this is not a technically sophisticated piece of movie-making—the same B-roll footage and musical soundtracks are used over and over again—the more I watch it the more I am moved by its message: That we are all made up of energy and energy is indestructible. It extends to the farthest reaches of the universe and through all time. Therefore, we all have a claim on immortality— and we can start to act on it now by heeding the truth of our spiritual essence.