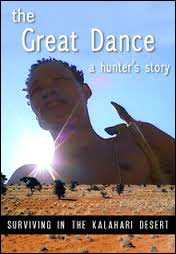 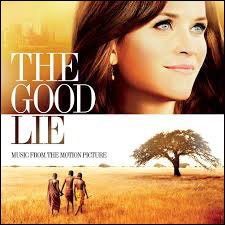 The Good Lie is a fictionalized account of a group of “Lost Boys and Girls of Sudan” who flee the brutal attacks of government soldiers to travel on foot to a refugee camp in Kenya, where they reside for more than a decade until being sponsored to come to the U.S. Their arrival in “the land of opportunity” is a mixed blessing at best. The loss of their relationship with the land they love and the communal life of their culture—which they had maintained even in the refugee camp—is both a tragedy for the “lucky” sponsored boys, but also a stark portrayal of the shallowness and materialism of our own culture, where the need to make money trumps all other concerns—even what it means to be human. God Grew Tired of Us is a documentary that tells essentially the same story, in a nonfiction format. Both films illustrate the richness of indigenous African culture in social and spiritual terms and the relative poverty of our own. 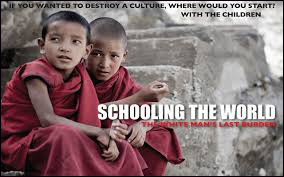 Schooling the World asks the question, “If you wanted to change an ancient culture in a generation, how would you do it?”

The answer, of course, is “You would change the way it educates its children.” That’s what the United States government did in the 19th century when it forced Native American children into government boarding schools. Today, volunteers build schools in traditional societies around the world, convinced that school is the only way to a “better” life for indigenous children. Indeed, one of the United Nations Millennium Development Goals is to “achieve universal primary education,” which is almost universally accepted as the “only way out of poverty.”

But this goal, laudable as it seems, hides several key assumptions that may not be true: one, that indigenous children are not being educated in their villages at home; two, that the Western definitions of “poverty” and “wealth” are universally accepted; and three, has the model of education even worked in U.S. society, let alone deserving of replication all over the world?

Filmed in the Buddhist culture of Ladakh in the northern Indian Himalayas, the film weaves the voices of Ladakhi people through a conversation between four carefully chosen original thinkers: anthropologist and ethnobotanist Wade Davis, a National Geographic Explorer-in-Residence; Helena Norberg-Hodge and Vandana Shiva, both recipients of the Right Livelihood Award for their work with traditional peoples in India; and Manish Jain, a former architect of education programs with UNESCO, USAID, and the World Bank. Schooling the world delivers a challenging, sometimes funny, and ultimately disturbing look at the effects of modern education on the world’s last sustainable indigenous cultures.

The film is available for purchase from the website, where you can also view the trailer here: http://schoolingtheworld.org/film/hd-trailer/

Louis Herman | Those who never left
Preserving the wild human | An interview with Dr. Louis Herman