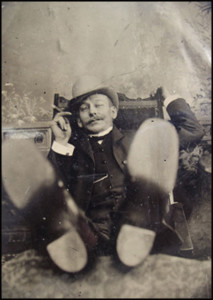 FOR THE THIRD NIGHT IN A ROW, the baker found herself up alone at two a.m. making sausage. She had long been in the habit of rising early, but what was less usual in this instance was the food that she had been drawn to prepare the last few nights. She did not often make things from the savory end of the spectrum, as she was a boulanger: a maker of pastries in the French tradition. She knew how to cook all manner of things, of course, but her little shop specialized in the likes of colorful macaroons and traditional madeleines that she had perfected over the years.

So why were her hands rolling casings instead of cookies? The baker wiped away an errant streak of grease from her cheek and sighed. It seemed she was in need of the advice that only the more piquant spices could give. The sweeter ingredients had failed her this time.

As the baker collected the bowls and measures of her trade, she waited for them to speak to her. She knew that townsfolk thought she was crazy. It was true that she kept to herself, but always it had been thus. As a child she had been shy to a fault and had preferred her own company within the confines of the kitchen walls; she had all the companionship she required right here in her shop.  As she sifted through the contents of her cupboard and selected her elements with care, she reflected upon the unique personalities that were revealed to the patient observer. Now her old friends revealed their own secrets of flavor to her, and she revealed her own to them in turn. She needed no one else.

“You’re making Saucisson en brioche,” Oil pointed out. “Something must be wrong.”

The baker reached for Yeast and dissolved it in Water, ignoring the host of tiny screams as she whisked it into a froth. “Maybe I just felt like something different,” she said.

“No, no, no, no, no,” Eggs said, but the baker tended to ignore them, as they spoke as a group and their echoes were difficult to understand. She cracked them into a bowl, one by one, until the kitchen fell silent.

“They had a point this time,” Pepper said.

“Hm?” the baker asked. Pepper’s accent was thicker than some and she didn’t always catch his words.

“Muffins and custard tarts, that’s your specialty,” Pepper continued. It always pressed a point past politeness. “Why this indelicacy? Why do you pollute our kitchen with sausage?”

The baker shrugged and beat the eggs. “People like a change sometimes.”

“What happened to make you want a change today?” Oil asked. Oil tended to be discerning.

“Nothing,” the baker said. She mixed the dry ingredients. “It’s silly, really. You know that ring I like?”

“The diamond?” Butter piped up, just before it slid into Sugar and Salt.

“Mm-hm,” the baker said. She added what was left of Eggs and worked everything until it was elastic in her hands. “I went in on Monday to try it on like I always do and it wasn’t there. The salesgirl said a man bought it yesterday.”

“A man?” Dough asked. “Maybe a man bought it for you. Maybe you will have a surprise today!”

The baker didn’t answer. The fact was, she’d been living in a silly fantasy. She had stopped into the jewelry store every Monday after she closed the bakery, and tried on the ring. It was a small diamond, so she knew no one would buy it. It was never on display, and the salesgirl always kept it in the case farthest from the door. The baker went in to try it on and dream about the day when she might wear one of her own on her finger. But three days ago the ring had been gone, and her hopes along with it. She was coming to realize that if something didn’t change she might always be alone in her shop with only her cookies and cakes for company. Maybe her neighbors were right. Maybe she really was crazy.

“Stop filling her head with nonsense,” Sausage said. “You’ll only get her hopes up and then it will hurt twice as much when nothing comes of it. It’s good for her to face the truth. Let her experiment with exciting recipes. It is healthy to try new things.”

Dough sighed. “You’re so mean! Maybe someone did buy it for her. How do you know she doesn’t have a secret admirer? You know nothing about men!”

“I know that she isn’t going to get a rmmmm—” The rest of Sausage’s words were cut off as Dough encased it.

“You aren’t crazy, you know,” Dough said after a moment. “Maybe … maybe you’re just lonely. I think that we’re not very good friends for someone like you, that’s all.”

The baker bit her lip. “That’s not true.”

Dough bubbled and rose a bit. “When I go in the oven, we need to start a new day. I’m going to come out plain brioche, small b, and you’re going to talk to some real people. Okay?”

“No, I can’t,” the baker said. She dipped her brush in the egg wash and painted Dough with a touch as gentle as a lover’s caress. “This is all I want. I’m happy here with you.”

But Dough didn’t answer. It sat silent and glistening in the rising rays of the morning sun.

The baker let it gather warmth as she cleaned up the remnants of the night’s work, then she slid Dough into the waiting oven to finish baking. She wiped the counters and slid the pastries into the trays, brewed the first pot of coffee and opened the door. When the timer rang, she had almost forgotten it altogether. She opened the oven door just as the first customer entered. “I’ll be with you in a moment,” she called as she tied her apron behind her back.

The baker’s heart fluttered. “It’s your lucky day. I don’t usually make this particular bread, but I had a sudden fancy for it and the loaf is fresh just now. I’ll cut you a slice.” She cocked her head, but she didn’t hear a peep of protest from Brioche. It just steamed in quiet invitation.

“It looks so good I think I’ll take the whole thing,” the man said. “In fact, I come here every Monday and I notice how great your breads are. Can I place a standing order for one?”

The baker blushed as she studied his features and found them to be unfamiliar. She had to admit that she’d never noticed the man. Maybe Brioche was right; she had been too preoccupied with her own whimsies. Could friendship be easier than she thought? As she wrapped the bread, she looked at him. He seemed friendly. She nodded. “That’s kind of you. Thanks.” She caught sight of a crease atop Brioche that resembled a wink, but it might just have been her. She placed it in a bag.

The baker smiled and nodded. “I’m looking forward to it.” And as he left with his brioche and the shop was silent for the first time in years, she realized that she really meant it.