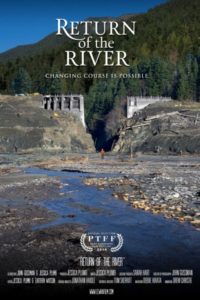 Return of the River tells the inspirational story of the Lower Elwha Klallam Tribe’s unshakeable advocacy on behalf of their ancestral home, the Elwha River. It took 100 years and the help of environmentalists, conservationists, the Olympia National Park, and ultimately, common citizens whose minds were changed, to bring down two dams and restore the river—and its legendary salmon runs—to freedom. As one reviewer wrote, “At a time when most environmental news is profoundly dispiriting, this film offers hope that people with different political and economic interests can work together to reverse some of the damage we have done. As someone who lives near the Elwha River and followed its story for many years, I found the film admirably fair-minded, letting adversaries put forth the best versions of their own cases. For me, the heart of the film lies in the willingness of people involved to change their minds when presented with new information. The media are fond of claiming that Americans are all locked into rigid and unassailable ideologies, yet the film portrays a very different view of civic life, one that evolves beyond polarized rhetoric.”

The film, which took four years to film and was released in 2014, addresses environmental justice issues that resonate far beyond the Pacific Northwest. As the Elwha Dams come down in Washington State, the future of the Amazon River is under debate, one of many river dilemmas unfolding across the globe.

As the largest dam removal project in history begins, the camera soars over mountain headwaters, dives into schools of salmon waiting to return upstream, and captures turbines grinding to a halt. The film features people and perspectives on all sides of the Elwha debate, reflecting the many voices of the Elwha Valley.

The power of the Elwha River’s story is described on screen by former U.S. Senator Bill Bradley:

Here, in the success of our collective action on the Elwha, is a template for success on climate change, energy policy, ocean conservation… and hundreds of other issues.  It will be the great gift of the Elwha: Hope. 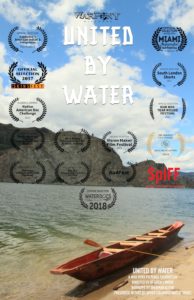 United by Water is another film about Indigenous people reclaiming their traditional cultural practices. Produced and directed by Colville Confederated filmmaker Derrick LaMere and narrated by Spokane-Coeur d’Alene Native Sherman Alexie, the film describes the flooding and destruction of the homelands and waterways of the five tribes of the Upper Columbia River by the installation of the Grand Coulee Dam. On July 16th, 1940, the tribes of the Upper Columbia held the last Salmon Ceremony before the flooding of Kettle Falls, their traditional fishing area for over 10,000 years. This day is now known as the Ceremony of Tears.

When Upper Columbia United Tribes (UCUT), a nonprofit from Spokane, Washington, acquired six old-growth cedar logs from the Quinault Indian Nation, they gave a log to each of the five communities of the Upper Columbia in the effort to reintroduce the tribal members back to the waters of their ancestors.

UCUT also contacted canoe maker John Zinser to teach the tribal members about the canoe-making process. Each community carved their 30+ foot long cedar logs into unique hand dugout canoes. Each tribe then launched their canoe from the tribal homelands and journey to Kettle Falls for the first time in over 76 years. Seventy-six years and a day after the Ceremony of Tears, the people of the Upper Columbia returned to Kettle Falls.

To purchase the film or host a screening, visit War Pony Pictures, or contact the filmmaker, Derrick LaMere at gmail.com.