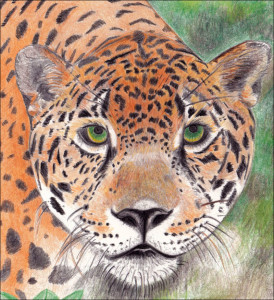 I have always felt most comfortable in nature, whether on top of a mountain, under the sea or anywhere in between.  In nature I found the sacred and stumbled across a spiritual path that felt good. Having an innate respect and love for our planet, I had been attracted to the Earth-based wisdom teachings of indigenous cultures for many years before stepping onto the path in the Laika tradition of Peru. The medicine wheel teachings of the Four Winds resonated deeply and I immediately developed strong connections to the archetypes of the four cardinal directions:  Serpent, Jaguar, Hummingbird, and Eagle/Condor.

While working in the West, where we examine our shadow self, I felt compelled to draw Sister Jaguar, “Otorongo,”—a source of protection and a reminder to live fearlessly yet with integrity. “Integrity” is the first picture I’d drawn in almost 30 years, apart from the occasional doodle with my children.  My spiritual path had released a part of me that I hadn’t even known existed and, with the encouragement of friends and family, creative expression suddenly became an important part of my daily life. I am still boldly experimenting with different media but my focus hasn’t changed: My pictures are of animals, birds, reptiles, insects and are of great spiritual significance to me.  As I paint, I connect to the energies of the archetypes and animal totems, who never fail to share important lessons.

Most recently, I began to embrace the wisdom teachings of indigenous elders of North America, which are incredibly similar to, and perfectly complement, those of the South.  “Standing with my Shadow” is the second in a series of paintings exploring the medicine wheel of the Ojibwe/Chippewa nations as shared by the inspiring Chief Robert and Terri Talltree (www.howtoliveonpurpose.com)

In this tradition, the West is the place of Water. It is where the thunderstorms come from and the rains that nourish and renew us. It is the place of the setting sun and also a place of darkness.  Although we cycle through the medicine wheel throughout our lives, spending minutes, weeks or years in a certain direction, the West is also connected to the autumn season and middle-age, when we tend to look within more deeply.  The relative who resides in the West is our brother the Buffalo, “Bishikee.” He embodies personal strength, power and steadfastness and represents abundance on every level.

In my middle age, as I delve deep into my shadow self, I appreciate the abundance in my life.  There is still room for more but my cup is now half-full rather than half-empty.   Sister Jaguar and Brother Buffalo are always with me. Otorongo has helped me release the ties of past influences, so that I may fearlessly step into who I am becoming and live an authentic life. Bishikee has taught me persistence and leads me gently along the path of least resistance. 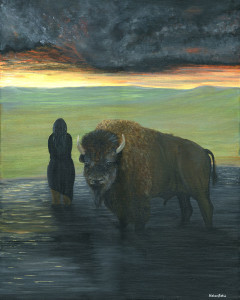