SHE WAS STANDING OUTSIDE THE PIZZA PARLOR when the old man slid his Cadillac into a parking lot, almost clipping another’s fender before the engine spluttered to a stop. He exited his car with a cantilevered motion, using his cane, the door jamb, and the rocker panels as a support. In the time it took him to close the door, turning like an old screw in a rusted shaft, she slipped inside the car.

It was a full moon night, the rising orb looked yellowed in smog and city lights for the few moments he saw it before entering the pizza shop.

Soon he re-emerged, stabbing his cane on cement and trying not to drop a box of pizza. He sat and turned and saw her sitting beside him.

“I’m hiding from my boyfriend,” she said. She took the pizza and set it on her lap. “I saw your car and I decided to jump in, to hide.” She looked around. “I think he’s gone now.”

“How the hell did you get in here?”

“The door was unlocked.”

“It was? I don’t remember it being unlocked.”

She leaned closer to him. Her hood shadowed her face. It was dark under the hem. “I bet you forget stuff.”

He had left the front door unlocked last week, and his daughter, coming by to check up on him, found a burner on the electric stove glowing red while he dozed in the front room. He told her this.

She looked to be about thirty years old, though the droopy bonnet of sackcloth yielded only impressions: the curve of her lips, the turned-up nose, and the black pools of her eyes: the suggestion of a Picasso odalisque. She was sculpted from darkness.

“The way you got your head covered.”

“That’s just the way I dress,” she said.

“It looks like a terrorist to me,” he said. He smiled. He was enjoying this, talking to a young woman. At least, her voice was young.

“I’m not a terrorist,” she added. “Just the opposite, I bring peace.”

“I don’t really have one religion. You might say I have them all. I’m more ecumenical in practice.” She looked over her shoulder. “Can you drive now? I don’t want this guy to find me.”

He started the car and with its shot springs and his shaky steering technique she felt as if riding in choppy water. He drove off. The full moon hovered in his windshield, as if drawing him near. He passed houses with wide lawns and sidewalks mottled in the shadows of streetlights and moon-reflected sunlight.

“This is unusual for me,” he said.

“Coming home with a woman?”

“Yeah, and me ordering a whole pizza. My doctor is down on cholesterol-heavy stuff, but sometime you gotta live, right?”

“This is my house,” he said. “You’re welcome to hide here for a time.”

They left the car. She carried the pizza, and in her other hand she too carried a cane whose tip she touched to the leaves of trumpet fronds. “They need cutting,” she said. He imagined her hips and buttocks swaying under the dark, loose-fitting, one-piece robe made of rough hemp. He discreetly broke wind.

They entered the house. It was small. He’d downsized after his daughter married and the wife died. He offered her wine. She sat on the couch and didn’t remove the hood she wore over her head, even when she was indoors. The sleeves were long and covered all but her fingertips that protruded like bladed sticks. She leaned the cane against the couch. He sat beside her, handed her the wine. They clicked glasses. “Is that you?” she asked, pointing at a black-and-white picture of a young man.

“Many years ago,” Joe said.

“You were a handsome young man,” she said, and something in her voice, a faintly grainy tone, suggested the perspective of an older person, judging from the vantage of years.

“Yeah,” he said, sitting a foot away from her on the couch. His youth was another country for him, one whose single inhabitant had done things he shouldn’t have and regretted others he hadn’t.

“I bet the girls were crazy for you.”

If that were a sop thrown to his vanity, he didn’t take it. After two marriages and one child, he was in the last few years disinclined to dwell on his successes with either the opposite sex or his professional life. He had taught for thirty years before retiring as a junior high school teacher, a job he regarded, in retrospect, as an advanced species of babysitting.

“There were a few that liked me,” he admitted. “Hungry?”

She made an indistinct sound.

He pulled the cover off the pizza.

“That reminds me of the full moon,” she said. “The roundness and the way the surface is mottled.”

“With sausage?” he asked.

He picked up a slice and ate.

She took a slice but left it on the small paper plate.

“Funny you should have appeared when you did,” he said.

“It’s the full moon. It brings me out. In fact, you could say it’s the only time I get out.”

“What do you do the rest of the time?”

“Your boyfriend, he locks you up?”

“It’s a little more complicated than that. People sometimes think of me as going around with a sickle but I couldn’t do that. I couldn’t be two places at once. So I’m allowed to make house calls once a month. I have restrictions. I have fun, though.” Luna leaned toward him on the couch. “You see, the old guys are grateful for what I can do for them. And I like the old bodies, guys like you, stooped, skin spotted, balding or with comb-overs. Hearing aids, canes, and walkers, they get me going. I prefer paunches to six-packs. I’m that kind of girl.”

“I don’t get it,” he said, and with the agitation of a young woman near him and the pizza roiling in his belly, he couldn’t resist the impulse to break wind, again.

She didn’t notice. “It’s because they are going back to nature. They are sinking into the Universal. I’m there to help them.”

“You sound like some kind of Hindu or something.”

“I belong to all religions.” She reached out and squeezed him on the thigh, and his cock responded, stiffening.

He touched his chest. “Maybe I shouldn’t have eaten that pizza.”

“Like you said, sometimes you just gotta live, you know?” Her hand touched his crouch. “Looks like you’re living a little right now.”

She leaned over and kissed his dry lips. Her hand squeezed. He felt his heart pump wildly. Lights flared and died in his head. The last thing he saw was the pizza still in its box, a couple of slices missing like a gibbous moon.

She took the pizza and the second glass of wine, ate the slice and drained the wine and set the cup back in the cupboard. She didn’t worry about fingerprints. She never left any. Outside, she saw the trumpet flowers and, looking around, with no one watching, she turned the cane into a scythe and cut down the flower’s head, and then she walked away, pulling the hood tightly over her face as she moved into the night. 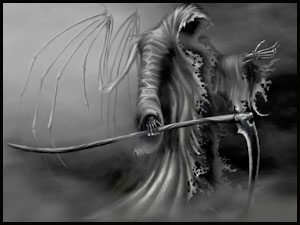