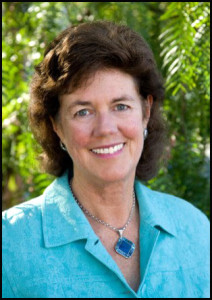 Corinne McLaughlin and her partner, Gordon Davidson, literally “wrote the book” on Spiritual Politics: Changing the World from the Inside Out. That was in 1994—a full twenty years ago. In 1996, they founded The Center for Visionary Leadership, a non-denominational educational center to help people develop the inner spiritual resources to be effective leaders and respond creatively to change. The Center’s purpose is “to support values-based visionary leadership in all fields of human endeavor, especially business and politics. “ The Center offers educational programs on spiritual development and social change, a free quarterly e-newsletter with articles, spiritual practices, and featured visionary leaders, and also designs custom trainings, consulting and coaching to a wide variety of government and non-profit organizations.

McLaughlin and Davidson have also written Builders of the Dawn, and The Practical Visionary: A New World Guide to Spiritual Growth and Social Change. The MOON decided to catch up with McLaughlin for an update on her book’s wisdom and analysis of the spiritual in the political.     — Leslee Goodman

McLaughlin: We co-create with the spiritual realm. There are forces moving behind the scenes, some of which are positive, and some of which are negative. We humans often collaborate with them—either consciously or unconsciously—depending upon our own motivations and intentions. Positively, we work with the spiritual realm to create good results on the planet—peace, harmony, sharing of resources, and so on. Conversely, there are energies willing to play on our fear, anger, greed, and other negative emotions. So it’s important to keep in mind this other dimension of reality.

McLaughlin:  I wouldn’t call the negative forces “spiritual,” but it might be clearer to call them “non-physical negative forces.” I generally use the word “spiritual forces” to refer only to the positive side of non-physical forces. Ultimately you could say that God, or the Infinite Source of All Being, is beyond good and evil. God is a being who doesn’t need the dark as a reference point to know the light. Ultimately, it’s all one. But we as human beings are given choices all the time to move in a positive direction or a negative one. There are energy fields you can walk into that are very toxic; very negative. It’s much harder to keep your spiritual alignment in those environments, just as it’s much easier to go on a spiritual retreat and be with a lot of people who are meditating or praying and feel very uplifted and inspired and be able to express your highest self. When we see world events unfolding, it’s important to be aware that we are not alone in the Universe and that there are a lot of non-physical forces moving behind the scenes. Ultimately, we are evolving—ever expanding towards unity consciousness—but according to the Ageless Wisdom, which goes back centuries, we take the path of synthesis through understanding polarity to get there.

I have a lot of optimism about the world even though, on the one hand, there is a lot of cause for deep concern because the negative forces in the world have taken even greater control of our economic and political systems. But on the other hand, we’re getting a lot more spiritual help today than even twenty years ago when we wrote Spiritual Politics.

The MOON: How did you come to know that there are spiritual forces at work behind world events?

McLaughlin: I grew up in a traditional Christian household, so from an early age I was aware that human beings have free will and that it is our responsibility to make choices—for better or worse. Our choices can be helpful to others, or harmful. Sometimes we’re not consciously aware of the effects of our choices, but to the extent we are aware, it is our responsibility to choose the good. Or not. But whatever we choose will have consequences.

As I grew up, and especially during my years as an activist in Berkeley, California, where I graduated from college in the late 1960s, I had a lot of questions about what was going on in the world, and why. I started studying philosophy and reading widely in the religions and esoteric traditions of the world. I discovered what is often called “the golden thread” that lies behind and connects all the great teachings and religions. These are also called the inner, or mystical, teachings or traditions. They answered a lot of the questions I had. Some of those answers relate to understanding the deeper causes of world events. So twenty years ago we wrote about how our thoughts and feelings—“the causal dimension”—affect the world. Consciousness creates the world of form.

It’s very inspiring and encouraging to us that millions of people now acknowledge this and understand the power of prayer and intention and feelings. Books and films like The Secret, about the Law of Attraction, are basically teaching people that we are co-creators with the divine in creating our own individual and collective realities. We need to take responsibility for our creations, and when what we’re creating is not so helpful to ourselves or others, we need to learn how to be more skillful in creating positive results in the world. This begins with the inner dimension—where we can also go to get help from the spiritual forces. In other words, we don’t have to rely on simply our own thoughts and feelings; we can be guided to be more effective and skillful at creating a better world.

The MOON: Please tell us more about this “other dimensional” help.