Collections: The search for the missing whole 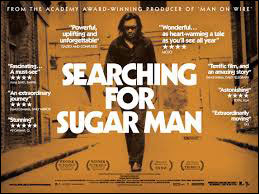 Searching for Sugarman tells the story of two South African music fans—Stephen Segerman and Craig Bartholomew Strydom—who decide to investigate the disappearance of American singer-songwriter, Sixto Rodriguez, whose music had been the soundtrack to the anti-apartheid movement thirty years earlier. The search is instigated when the men discover that most American music-lovers had never heard of Sugarman, while the story in South Africa is that he had gone out in a blaze of glory—committing suicide on stage at a packed concert. The movie is a classic “quest for the Holy Grail” story, as the trail leads the men to producers of questionable integrity, dead-ends, and at long last, the exhilarating success of finding Sugarman alive. The men then stage a series of “resurrection concerts” that reunite Sugarman with his adoring South African fans.

Searching for Sugarman not only chronicles Segerman’s and Strydom’s “search for the missing piece,” it also profiles a humble man who never feared hard work (he began and remains a laborer in Detroit), or expected fame or fortune. He was home asleep in his bed when the film won the Oscar for best documentary feature (Rodriguez doesn’t own a television), still lives in the run-down home he has occupied for forty years, and has given most of his recent earnings away.

Searching for Sugarman was written and directed by MalikBendjelloul, a first-time Swedish filmmaker who, having run out of funds himself, actually filmed portions of the movie on an iPhone, using an app he bought for $1.99.  Nevertheless, his film not only won the 2013 Oscar for Best Feature Documentary, but 27 other awards worldwide. Like its hero, the film relies on humility and storytelling for its impact, rather than on spectacle or special effects. But its impact grows on you over time and repeated viewings. As one reviewer noted, “It starts as a bittersweet parable about the cruelty of commerce, but the wonder of Searching for Sugar Man will not soon slip away.” 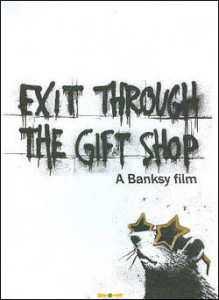 Exit through the gift shop is a 2010 documentary by graffiti artist Banksy. The film’s focus is French-born L.A. thrift-shop owner Thierry Guetta, whose compulsion to videotape every moment of his life leads him to document the phenomenon of contemporary street art. Introduced to the world of graffiti artists by his cousin, a street artist known as Space Invader, Guetta becomes enthralled by the risk and adventure of their pursuit. Soon Guetta’s compulsion turns to filming every street artist of note. Eventually he meets Shepard Fairey, now famous for creating the iconic Barack Obama campaign poster, but previously known for his ubiquitous stickers featuring an image of Andre the Giant over the word “OBEY.” What other famous graffiti artist is left for Guetta to film? Only the elusive street artist/prankster Banksy.

All is well until Banksy insists that Guetta stop “collecting footage” (filming) and start editing. Guetta is completely overwhelmed by this task, forcing Banksy to assume it himself, while Guetta, with time on his hands, becomes a visual artist in his own right.

The film was well-received, and even nominated for an Academy Award. The New York Times wrote, “Scrutinizing the commodification of street art and the lemminglike behavior of many enthusiasts, Banksy mischievously exfoliates the next-big-thing hunger and the posers who pursue it.” The Chicago Sun-Times admitted that, “The widespread speculation that Exit Through the Gift Shop is a hoax only adds to its fascination.”

Collections: The search for the missing

Collections | The search for the missing whole
Rethinking Agriculture