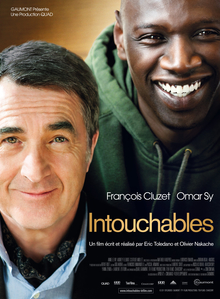 The Intouchables is a 2011 French film that is one of my favorite movies of all time. It tells the true story of Philippe, a lonely, staid, quadriplegic millionaire who needs a new caregiver. He hires Driss, a boisterous young African immigrant, who applies for the job, not because he’s qualified, but because he must prove that he is seeking work to receive his unemployment check. During Driss’s one-month probationary hire both men learn raw, potentially alienating facts about the other’s lives—but instead of withdrawing from the other, both men allow their hearts to be opened and draw inseparably close. In fact, the two men on whom the film is based remain friends to this day.

Rotten Tomatoes describes the film as “An irreverent, uplifting comedy about friendship, trust and human possibility.” A few months after its release, The Intouchables became the highest-grossing movie in a language other than English, and a few months after that became the 2012 top-grossing foreign language film in North America.  Although some critics called The Intouchables “a third-rate buddy film” at best, the British Telegraph suggested that one of the reasons for the film’s popularity “seems to be that it gives the audience permission to laugh with, not at, people with disabilities, and see their lives as they have never seen them before.”

The film received 40 award nominations and 35 wins, including the Best Foreign Film for directors and writers Eric Toledano and Olivier Nakache from the African American Film Critics Association, the Japanese Academy, the Black Film Critics Circle, Black Reel Awards, Cinema Brazil, FICE (Federated Italian Cinema), and others. Omar Sy, who played Driss, won the César Award for Best Actor, and the film earned seven other César nominations, including Best Picture, which it lost to The Artist. It is available on Netflix, Amazon, Vudu, YouTube, and other platforms. 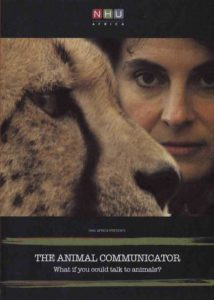 The Animal Communicator is a 52-minute documentary about Anna Breytenbach, a professional animal communicator from South Africa who, after a 12-year corporate career in human resources and information technology, decided to pursue her passion for wildlife, particularly big cats. She served as a cheetah handler at a conservation education project, undertook training as a tracker through the Wilderness Awareness School outside of Seattle, and found that, as she spent more time observing these animals, she began to experience a heightened state of awareness with regard to them, receiving brief mental images or other “sensings.” These “sudden knowings,” as she described them, would subsequently prove to be true, inspiring her to pursue advanced studies in interspecies communication through the Assisi International Animal Institute in the U.S.

The film about her life and work was produced by Swati Thiyagarajan, Craig Foster and Damon Foster and nominated for Best Long Documentary and Best Director at the 2012 World Mountain Documentary Festival of Qinghai, China. A short clip from the documentary depicting Breytenbach’s interaction with a black leopard, “Diablo,” at the Jukani Predator Park in South Africa, was published on YouTube and went viral with over 4.5 million views.