Now, naked to the heavens, a demented heist—
After the apocalypse, the man who awaited Christ—
The giver and the gifted, blessed twice?

A soldier in death’s rapture, yet he’s lost his crown—
After the apocalypse, the man who awaited Christ
combs through wasted Armageddon—a ghost town.

THE TREES IN WINTER (a triolet)

THE IMAGE OF MIGRATING GEESE (a triolet)

OF HONEYSUCKLE & GARGOYLES (a triolet)

IN DARK WOODS (a triolet) 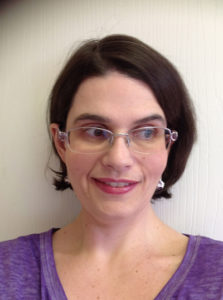 Anna Cate’s poems have appeared in Abyss & Apex, Codex, Blueline, Frogpond, Specs, Yarn Review, Matter Press, The MOON, and other venues.  She has been awarded first place in the Caribbean Kigo Kukai Contest, first place in Cattails Samurai Haibun Contest, and Ohio Poetry Day, and has also been nominated for the Pushcart Prize.

Like what you’re reading? Please consider a contribution to keep The MOON shining. Click here to contribute via our secure PayPal link, or here for our Patreon page, where you can become a continuing supporter of The MOON for as little as $1/month. And to you beautiful souls who already support The MOON, thank you!

Kim Brookes | Ways to the end
Bill Arnott | Death of a boy, a father, a friend