Adel Aaron | Night at the Hyatt 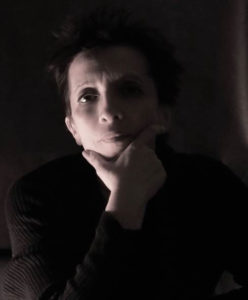 “You were different.” Sheila said it with sensuous pleasure.

Andy thought for a moment. “Did you like it?”

“Yes.” She smiled, remembering the way she’d felt just a few minutes ago.

“Oh?” She leaned on one hand and began playing with his hair. Soon she turned around. Their naked thighs touched. She liked the feeling. She lay on her back, satisfied, looking up at the ceiling, feeling warm and cozy.

“You want to take a shower? We’re cutting things very close.” Short brown hair growing high onto his clean forehead, the well-proportioned, muscular lines of his cheeks and nose gave his face an open and attractive look. Presently, however, it was clouded by the anxiety he’d experienced over the last few days.

“It’s still early.” She stretched her long, lean body, like a Siamese cat. He watched her quietly.

“What?” She raised herself on an elbow to better see the green digits on the clock. “Four thirty!” Sheila quickly got up. Before disappearing behind the closed bathroom door, she gave another quick, happy look at her Valentine’s presents peeking through the torn gold wrapping paper on the bureau: lacy lingerie and a big oval bottle of Obsession. In her early forties, she still looked very attractive and was in excellent physical shape. When her thick, fair hair was drawn back in a tight bun, the gray eyes under her high brow looked big; their gaze was pointed, penetrating, seductive. He called her a mermaid enigma: her perfectly shaped legs made her look even slimmer and taller.

Andy wanted a cigarette. Three sharp, vertical furrows cut deeply into the skin between his eyebrows. This was the first serious urge he’d had in the six months since he quit smoking. He was thinking about last Friday. He allowed his thoughts to stray to the Hyatt’s lobby, the restaurant. He remembered every minute detail: flowers in the corner, simple dinner, the elevator’s flight.

“I’ll be ready soon. Are you going to take a shower?” Sheila was drying her hair in front of the mirror.

He took a shower, shaved, and got dressed. He was thinking about his trip to Washington. He didn’t think about the conference; in his head, he was going over and over the night at the Hyatt, before he flew home.

“Ready?” He looked at Sheila’s high heels and thought of the restaurant’s busy parking lot. It would be difficult for her to walk in the snow. “I’ll drop you off first and then park.”

“Sure.” The set of wall-to-wall mirrors reflected her eye-catching image in perspective, from large to small, like a Russian nesting doll. She observed herself one last time and, satisfied, went downstairs, stepping soundlessly on the high, soft carpet. Andy turned off the light; the mirror gave a momentary spark before it went dark.

Back in December, Andy had reserved their favorite booth at the Pomegranate. It was always crowded there on Valentine’s Day. This time, too, they waited for menus for a long time. Elegant in her deep red velvet dress, Sheila sat straight, yet her body was relaxed. A keen, confident smile played on her beautiful face.

He felt a pang in his heart, as if he suddenly feared she’d read his mind. His well-controlled facial expression didn’t change, though, when he asked, “What do you mean?”

She was cool, her gaze inviting. “You’re a bit quiet, my darling.”

His thoughts were vague and obscure. What was the matter with him? He was forty-four years old and happily married. He was always happy with Sheila. The waiter brought 1928 Krug.

“Am I?”  He found her hand and kissed it. He noticed her freshly done nails and the ring with a carat blue sapphire: her birthday present from him. “I want to drink to my beautiful wife.” He raised his glass.

“I still remember your new, aggressive approach.” Whatever liner she’d used today made her almond eyes look even bigger.

For no apparent reason, he, from whose lips words always flowed so easily, became tongue-tied. What? Again, he thought of the Hyatt. What a cozy little place it was, with the French restaurant in the lobby, across from the escalator. With her back to the exit, Candy sank deeply into the soft leather cushions. Andy remembered how all at once a strange feeling had come over him. He must’ve been curious, he concluded.

Candy and Andy had been colleagues for a few years now. She was from DC. Every now and then they would meet at company events. Andy couldn’t say why he was so self-conscious of how their names rhymed. When people chuckled and pointed out the obvious, he obviously felt uncomfortable. Before long, Candy began introducing herself by her middle name; it didn’t go unnoticed by him. Lately, they’d been working on the same project and met via teleconference almost every week. He saw her image on a seventy-five-inch screen and she saw his. In the beginning it was a slog, a royal waste of time he could never recover during his busy day.

Soon, however, things had changed; he began looking forward to these meetings. They worked off each other’s humor and business ideas. Candy was the first to join the conference and the last to log off. She always seemed small in her chair, a tad too conservatively dressed. He liked her work ethic, could always rely on her being ready for the meeting. Never too harsh, she tactfully delivered her points. He appreciated her thinking process, though he couldn’t agree with most of her proposals; couldn’t afford them, rather. They were clever, unique, but required long-term strategies he wasn’t prepared even to consider. She chose the proactive approach, leaving him to deal with putting out the daily fires and, therefore, siding with the pragmatic flank far more often than he preferred.

Since last summer he’d contemplated attending the international trade show, a prestigious annual event in DC. However, he didn’t want to miss four days in the office; after all, February was the shortest month of the year. But when he found out Candy would be going, he made up his mind to go too. If he’d been asked whether he ever thought of her outside the work environment, he could deny it with a clear conscience. And yet it would have been a lie. Maybe I’m simply curious about her, he suggested to himself over and over again. But deep down, he knew he couldn’t free himself from thinking of her so easily. As a matter of fact, he was thinking of her all the time.

“I want to try it again tonight. You think you could duplicate your . . .” Sheila moistened her glossy, well-drawn lips, “aggressiveness?” She picked up her thin, half-filled flute; he saw the bubbles trying to escape from the glass, rushing up to the surface.

“Of course.” He felt her long, sexy leg pressing his under the tablecloth.

“Madam.” A young waiter brought the appetizers. Andy looked at his big, well-decorated plate with a small crab cake placed in the middle of it. “Bon appétit.”

When the waiter left, Sheila looked around the room, cramped with a loud, well-to-do crowd. “I’m happy you were able to get a booth. I love this place.”

“I love this place.” Candy pointed at a small candle on the table.

“I don’t mean to rush you, but I drafted a response to your proposal. I have it up in my room. I thought we could look at it tonight.”

“What do you think? Are you done with your salad?”

Still she didn’t answer but moved her plate away, indicating that dinner was over. She reached for her purse. “May I…”

“You may not. You had a salad and a glass of water. I believe I can afford to cover both.”

“My pleasure. Shall we?”

It was still early and they had plenty of time to get prepared for tomorrow. She followed his lead. In the hallway, they didn’t meet anyone they knew. The elevator stopped, its ring tone a musical note fa—fifteenth floor. His room, relatively spacious and pedantically clean, had a small corner balcony. He turned on the desk lamp, plugged in his computer. She stood in the middle of the room. Neither one had said a word since they’d walked in.

“Would you like to pull up a chair? We can look at the slides together.” He wanted to help her and accidentally touched her hand. She didn’t retreat. His fingers touched her shoulder. He felt how she trembled. He could have sworn she didn’t breathe. He knelt and kissed her on the lips. She responded tenderly, unpretentiously. Was he still only curious? Yes! He was on an exploration expedition. He submerged his hand in her red hair; it was short and nothing like Sheila’s: luscious, long, full, silky. He thought he should’ve been disappointed, but he found this boyishness surprisingly endearing. He was so much stronger; an urgent desire to protect this delightful creature shook him to his core.