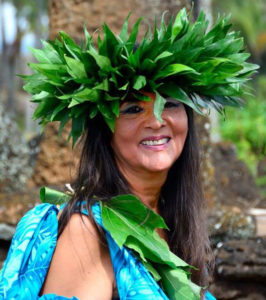 Kahuna Wahine Ali’i Nui Kalei’iliahi is a kanaka maoli (aboriginal) of Hawai’i. She comes from a long line of spiritual kahunas (priests/shamans) and ali’i (chiefs/chiefesses, no “t”). Among the gifts she carries as ambassador of the Ancients is that she is a seer, medium, metaphysician, spiritual healer, keeper of the Lemurian truths and channel for many magnificent holy beings.

Kahuna Kalei’iliahi has worked with people throughout the islands and worldwide, spreading her mana (divine energy) and performing her sacred ceremonies and spiritual readings.

Born and raised in the lush Kalihi Valley of O’ahu, she can trace her ancestral roots 75 generations all the way back to the stars: to the Makali’i (the Pleiades), to Papa (Earth Mother) and Wakea (Sky Father) and down a long line of Kahuna Wahine Ali’i  and Kahuna Kane Ali’i  (Royal High Chief Priests and Royal High Chiefess Priestesses).

Kahuna Kalei’iliahi’s family God is Lono, God of peace (and of fertility, abundance and agriculture). Lono is uncle to Goddess Pele and Kalei’iliahi is their descendant. She is the reason for their existence and honors her ‘Aumakua’ (ancestral spirits) by using the multiple gifts they blessed her with, in service ‘Io Kapu Nui (Most Sacred Creator) and to Humanity.

Each year Kalei’iliahi travels all over the world bringing the love, light, and wisdom of the Ancients of Hawai’i through her workshops and sacred ceremonies….touching others with their aloha. She lives with her husband Lopaka on the Big Island of Hawai’i, from where she spoke with The MOON by phone. To learn more about Kahuna Kalei’iliahi, or subscribe to her newsletter, please visit her website.  – Leslee Goodman

The MOON: What does it mean to be a kahuna?

Kalei’iliahi: Kahuna are born, not made. I come from a long lineage of spiritual kahuna, an honor and responsibility handed down for generations matrilinearly. In ancient times, the spiritual elders would know ahead of time which child would be the next kahuna. They would then watch for confirmation by observing the child—much as Tibetan Buddhist elders observe the child they believe is the next Dalai Lama. Each newborn kahuna carries mana, spiritual energy, which increases as it is given to the next kahuna over generations, so that each kahuna carries the grandness of knowledge, wisdom and power of those who walked before them. This enables us to receive messages from the spiritual realm. I represent all the kahuna of my lineage. They live inside me and are present through me.

The Hawaiian word “kahuna” is actually made up of two words: “kahu,” which means caretaker or keeper, and “na,” which means essence (and can also make the word plural). It also has a hidden meaning–“ka” means “the” and “huna” means “secret.” So the kahuna are the caretakers or Keepers of the Secret.

There are many kinds of kahuna, representing the different lineages and each carrying different skills and gifts. I am a Kahuna Pule. Pule means prayer, therefore I make the holy words that create positive energy. Other Kahuna La’au Lapa’au specialize in herbal healing, or Kahuna Oli, who are master chanters, and Kahuna Kumu Hula, who master the hula. There are even Kahuna Wa’a, who are master canoe-makers, because everything we do has a spiritual component.

I am a traditional kahuna, by which I mean that I carry ancient spiritual teachings which are pure and untouched by other religious influence. At the time of the missionaries, we were already forbidden to practice our religion. Many kahuna went underground; many temples were destroyed. Other kahuna incorporated elements of Christianity into their practice. I don’t do that. There is nothing wrong with Christianity; it’s just not my religion.

I am also not New Age kahuna. I communicate ancient knowledge in modern language that contemporary people can understand. The Ancients were the master metaphysicians. Sometimes the Ancients will give me a message, and then a New Age messenger like Kryon will confirm it. To me, that is very profound and beautiful, showing the connectedness to the One Source.

As it says on my website, I trace my ancestry all the way back to the Pleiades, the seven sisters. Our creation stories say that this is where we come from. Hawaiians have since learned that many indigenous people share the same creation stories and ancestral lineage, including indigenous of North America, the aboriginals of Australia, and even the indigenous of Japan, who call the Seven Sisters constellation “Subaru,” like the car manufacturer. The Subaru logo even incorporates that star system. Synchronicities abound!

I consider it significant that you and I are having this conversation during Makahiki, the three-month season when we honor my family God, Lono, who is the Spirit of Peace and Compassion and Abundance. In ancient times, wars were prohibited during this period. Instead, it was a time of feasting, love-making, harvesting, games, and enjoying the gifts of peace. It is also the time of year when the Pleiades are most visible in the Hawaiian sky. It is when we give special honor to our Sacred Ancestors from the Makali’i (Pleiades). As we’re talking my Ancestors are telling me that our conversation is by design. They know who you are and the work you are doing. They honor you.

The MOON: Wow. That brings tears to my eyes.

The theme of this issue is “The Earth speaks: Recognizing indigenous wisdom,” which includes communicating with the Earth, the elements, the ancestors, and all of creation. I’ve always heard that the Earth loves us like a mother, but that has always existed primarily as a poetic concept in me, not as a felt experience, except for rare (but powerful) occasions. Please tell us what that communication is like.

Kalei’iliahi: As a kahuna I am profoundly connected to the planet and my Ancestors, and I can’t imagine my life without this relationship. Also, since I was little I’ve been able to communicate with the animals, the clouds, the wind, the rocks, or as the Sioux say, Mitakuye oyasin, “All my relations.” Today, we live in a world of instant global communications, but most of us have forgotten our most basic communication: our connection to the Earth, to Gaia. This connection is physical, as well as spiritual. Our bodies are made from the dirt of this Earth therefore we have an inseparable connection to Gaia, and Gaia knows each one of us. So my Ancestors advise people to take themselves—and their children—out daily into nature. Take a walk and find a rock that speaks to you. Take that rock home and speak to it every day. Greet it daily. Eventually, that rock will begin to speak back to you, because all of the knowledge of Gaia—and your Ancestors—is present in that rock. Your Ancestors will weep with joy when you begin to speak with them.

The MOON: What is the Earth saying to us these days?