Betwixt the stirrup and the ground, mercy I asked, mercy I found. — William Camden

Redemption. That is the name of my business. If you’ve got a reason why you can’t pay back Mr. Spinelli his money, save your breath. I’ve heard them all before. Whatever I do to you (and, believe me, I can do plenty), that is nothing to what Mr. Spinelli can have done to me.

My heart might bleed for you, but that’s just a metaphor and an ironic metaphor at that. If I cross Mr. Spinelli it won’t be a metaphor, if you get my drift.

Talking of crosses, I haven’t been to confession since I don’t know when. I don’t want some smart-aleck priest telling me I’ve got to feel contrition. This job isn’t about feelings. It’s just business.

Mrs., let’s call her Mrs. Davies, her husband wanted a brand new car. Between you and me, he wanted a brand new car so he could impress the floozies. He did the smart thing and got Mrs. Davies to borrow from Mr. Spinelli. Mr. Spinelli has a saying. He says, “Borrow from me, not from your friends. You will lose your friends but you will never lose me.”

And that’s where I come in. Mrs. Davies defaulted on the loan, which is the posh way to say she didn’t pay what she owed. It started out as a debt of ten thousand pounds but it is surprising, at least it’s surprising to mugs like her, how soon that can become fifty thousand.

I took the car. In the process, part of Mr. Davies’ anatomy got chopped off in the door. He won’t be impressing the floozies or Mrs. Davies any time soon. And of course the car may not be there but the debt won’t go away. She will still be paying it off until she is pushing up daisies. And if she defaults again that might be sooner than she thinks. Mr. Spinelli likes to make an example of somebody now and again. If need be I will redeem her debt with acid. Fatally.

The debt will pass to Mr. Davies. The death of a debtor can concentrate the mind wonderfully and, if I say so myself, he will be squeezed out like a lemon.

I go home to my family at night. I have supper waiting for me on the table and a fire burning in the hearth. I read the kids their bedtime story and watch some television. Then my wife and I go to bed. I sleep like a baby.

Redemption is only part of the business of course. There is also the business of getting people into debt. Mr. Spinelli says “follow the money,” no matter where it comes from: sex, drugs, even rock ’n roll. A special division of the operation offers free samples of heroin to students and who can resist a free offer? When the payment becomes due, we are there to help. We offer loans. The rate is a modest 1600% APR for those who read the small print. They never read the small print.

In fact my first job with Mr. Spinelli was handing out free cigarettes at the school gates. “Every little bit helps,” Mr. Spinelli says.

Simon, that’s my son, he asked me what I did for a living and I explained that I helped out people who were short of money and they paid me back when they had the cash.

“So how do you make any money out of that? You lend me five pounds and I give you five pounds back later.”

See what a smart kid he is?

“Well, Daddy charges a little interest on the debt and we live on that.”

“You could charge a lot of interest and we would get more money.”

Well, I just ruffled his hair and thanked God I had such a clever son.

I always keep my gun locked up. Any parent would do that. Then Margrit, that’s my wife, she decides she has to clean out all the cupboards including the one with the gun in it. It was only open for a few minutes but Simon is quick as a ferret out of a drainpipe. He was into the cupboard while Margrit’s back was turned.

The next thing that happened was he put the gun up to his head and pulled the trigger.

The gun is a revolver and the first chamber is always empty so the gun just went “click.”

Margrit rushed him to A and E and after a long wait the doctor said his leg would need surgery and there was a waiting list.

So we had a row and Mr. Spinelli, who seems to know everything, knew all about it. He offered to loan us the money.

“But me no ‘buts’. It is an interest-free loan. You’re one of my boys and I don’t let my boys down.”

He is one of the few people still alive who uses an aftershave called Old Spice. When I caught a whiff of ‘Old Spice’ on Margrit’s neck I realized exactly what sort of “interest” Mr. Spinelli would be taking on the loan.

My first thought on this was to wonder what Spinelli’s face would look like if I sprayed it with acid. It was a satisfying thought. I didn’t blame Margrit. Spinelli just used her love of her son to force himself on her. As he says, “Everyone has their buttons you can press.” I then thought that the organization would make sure Margrit and my family suffered more than Spinelli had. I had to think it out again.

I had a long talk with Margrit. We came up with a plan.

I hadn’t been in a police station since I was a teenager. The desk sergeant was half asleep but he did wake up when he heard what I had to say.

“I worked for Albert Spinelli for nineteen years. You have been after him for longer than that. I will tell everything I know in exchange for immunity and a new identity for my wife and family.”

He vanished into a back room and a junior detective emerged. He looked as if he were straight out of school. I asked to see his superior. He tried to stonewall but I repeated my little speech to the desk sergeant. It seemed his superior was available to take a statement. I was there all day.

On the way home I visited the church.

If the priest was surprised to hear my voice he didn’t let on.

“Bless me, Father, for I have sinned.”

Redemption. It comes for everyone. 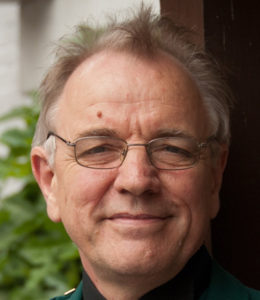 Derek McMillan lives in Durrington, in Sussex, England, with his wife, Angela, who is also his editor. His latest book is Durrington Detective Agency, which is a collection of short detective stories with something for everybody. http://derekmcmillan.com/