The destruction was complete. It was so stunning that his brain could scarcely take it in. The attack had come with such force that to look upon the detritus of what remained was a task on its own. He tried to get his bearings on where he stood now. A homestead he had frequented for many years was now unrecognizable. What was this? What had happened here? “Why” did not even figure into his reasoning yet. He took a few steps forward and then ran headlong to find his loved ones amongst the ruins scattered before him, numbed by the sheer destruction he was seeing. His pulse quickened now, he went in the direction of the main house, or what was left of it. Not one brick lay on another; straw binds and wood beams had broken into splinters crunching under his feet, as if some giant had taken a swipe and wiped all that he ever owned off the face of the earth. At a distance from the debris, he saw his dead children, tossed like broken and discarded rag dolls. He ran to them, picking up his youngest, his darling girl, who only hours ago had pleaded that he bring sweetmeats for her upon his return. He turned her over and picked her up to hold her to his chest. Her limp, lifeless body, now so cold. His eyes blurred with tears and the salt stung in his pupils. Her hair still smelled of fresh flowers and he buried his face in them to find final comfort. The other children lay at further intervals, scattered across this hellish landscape that just a few hours ago (so hard to believe, had it been just hours?) the happiest place. He lay his daughter down with care and ran to his sons. Oh my sons, my boys. Broken limb to limb, dead and bruised. My pillars. My strength, now lifeless in my arms. He looked around in sudden alarm, seeking a focal point to this madness. There must be some sign, some spoor or trail that could explain this calamity. He found none. Stepping around the corpses of his sons ran towards the open fields and yelled out his wife’s name, but in reply all he got was the sound of the wind sweeping through the expanse. There was nothing here now. Nothing remained of him, his life, his possessions; all that he had had been taken in one fell swoop. His mind was too numb to react to all this and he fell to his knees and choked on sobs that rose like tsunamis. His hands dug into the fertile soil of his farm and he let the dirt crumble through his fingers. Just like everything he’d had, it fell away. Then came a sound from his throat, an unearthly crescendo as if some demonic monster had been unleashed from the depths of Hades. He cried out to the azure sky as if to bring the heavens crashing down on the ruins of his family. But the sky remained unmoved, the clouds drifting slowly in their singular purpose, birds still chittering and hopping from branch to branch. Sun still shining in its full zenith. At any other time, even just a few hours ago, this would have been a beautifully pleasant day. Life all around him continued on. Only he, the bereaved, had been destroyed; his family killed; his farm obliterated. There he was, desolate, derelict and without any answers. 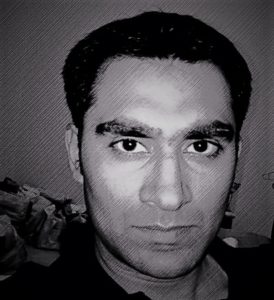 Rizwan Saleem is a banker based in Dubai, UAE, who writes of the various escapades suffered through his life, and of the profound surprise at having survived long enough to pen them. His poems and prose have appeared in anthologies Twenty Seven Signs by Lady Chaos Press, Self-Portrait Poetry Collection by Silver Birch Press, E fiction India, Scarlet Leaf Publishing, and Colors of Refuge.